September has been a wild month for the market. It began with the S&P 500 and the Nasdaq hitting new records, as Apple AAPL and other big-names continued to climb higher. The market then experienced an ultra fast selloff, with the tech-heavy index falling into correction territory in just several sessions.

Stocks have chopped around since then, and technical traders point to the 50 and 200-day moving averages for levels of resistance and support.

Traders are now betting on the continuation of volatility through the election, which is just five weeks away. The specter of the coronavirus also lingers, even as the U.S. economy and others slowly recover. This is reflected in the improving earnings outlook (also read: Handicapping the Q3 Earnings Season).

Given the historic coronavirus selloff, the fact that the proxy index for the broader market is up 4% in 2020 and 50% off its lows, seems like a win. And it’s always worth remembering that corrections are common and healthy aspects of the stock market. Plus, the Fed’s decisions to keep its interest rate pinned near zero through at least 2023 should help support stocks.

With the S&P 500 sitting around 6.4% off its early September records investors with a longer-term outlook might want to consider adding a few stocks. So let’s explore three cheap tech-focused stocks, trading under $20 per share, that look set to grow within futuristic industries… 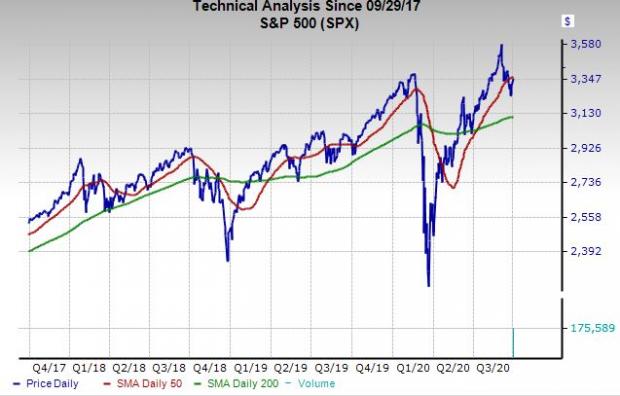 Electric vehicles have transitioned from hype to the realistic future of the industry, as nearly major automotive firm races to roll out their own EV offerings in an effort to catch up to Tesla TSLA. Luckily for investors, the EV market is not a zero-sum game, and Chinese EV maker NIO has become a rising star in the booming space. The firm’s EV sales are growing and it’s also focused heavily on providing customer support, autonomous driving tech, and most importantly, batteries, which are the lifeblood of the industry.

Zacks estimates call for NIO’s Q3 revenue expansion to top last quarter’s showing at 144%. Overall, the company’s FY20 sales are projected to jump 91% to reach $2.16 billion, with FY21 expected to come in another 76% higher to hit $3.79 billion. Meanwhile, NIO’s adjusted losses are set to trend in the right direction and its positive earnings revision activity helps it land a Zacks Rank #2 (Buy) right now.

NIO’s success in the Chinese market has garnered praise from analysts, including Deutsche Bank. The firm just recently said that the company had potential to be the “next iconic auto brand,” when it raised its price target and recommitted to its “buy” rating. This note helped send NIO stock soaring Tuesday, up 8% through early afternoon trading to $20.31 per share. NIO shares are now up over 750% since the market’s March lows and 1,200% from Sept. 2019 when they were trading for under $2 a share.

DouYu is a live streaming firm focused on video gaming and e-sports. The company, which went public in July 2019, is backed by Chinese social media and gaming powerhouse Tencent TCEHY and has drawn comparisons to Amazon’s AMZN Twitch. DouYu is set to expand with the broader gaming space that is projected to soar from $159 billion in 2020 to over $200 billion by 2023, with China playing a big role.

Investors should know that Tencent proposed in August that DouYu enter into a stock-for-stock merger with rival HUYA HUYA. The firm is currently evaluating the “preliminary non-binding proposal.” The deal would create a powerhouse in the streaming gaming industry in the world’s second-largest economy. But it’s unclear if it will happen.

DOYU’s adjusted fiscal 2020 earnings are projected to soar over 235% to $0.57 a share on 27% higher sales that would see it reach $1.32 billion. Peeking further ahead, the company’s adjusted FY21 EPS figure is projected to climb another 37% on roughly 30% stronger revenue. The stock has earned some positive bottom-line revisions recently to help it grab a Zacks Rank #2 (Buy), alongside its “B” grade for Growth and “A” for Momentum in our Style Scores system.

DOYU shares have surged 100% since March 23 to double the gaming market’s average. The stock is now up 70% in the past 12 months, against its industry’s 5% decline. DouYu’s expansion includes a 17% drop from its early September highs, which could set up a better buying opportunity for those high on the stock. And even though it has easily outpaced the gaming market, which includes Activision Blizzard ATVI, Electronic Arts EA, and others, it trades at a solid discount in terms of forward sales.

PLUG has since expanded its offerings to the on-road EV market, which includes buses and delivery vehicles. The firm is part of the growing hydrogen power market and its hydrogen fuel cell-based turnkey solutions are being used by the likes of BWM, Amazon, Walmart WMT, and others.

Plug Power plans to help power everything from warehouses and data centers to zero-emission on-road vehicles for decades to come. Wall Street showed its increased appetite for the stock after it announced in early August that it was selling almost 31 million shares for $10.25 each. PLUG shares have skyrocketed 320% in 2020 and 70% since the end of July. The stock is now up nearly 600% in the last two years.

Meanwhile, Morgan Stanley and others have taken a liking to this pure-play clean energy stock, as hydrogen-based solutions become more economically viable. Plug Power topped our Q2 estimates in early August. And Zacks estimates call for its full-year 2020 revenue to jump 35% to reach $300.9 million, with FY21 expected to surge another 31%. This would mark three-straight years of 31% or higher top-line expansion. PLUG is also expected to continue to cut its adjusted losses.

Plug Power is a Zacks Rank #3 (Hold) at the moment that has seen its earnings revisions trend in the right direction recently. PLUG also rocks an “A” grade for Momentum. Plus, six of the eight brokerage recommendations we have for Plug Power come in at a “Strong Buy.” And no matter who is in power in Washington, market forces are slowly shifting toward clean and renewable energy.

Experts extracted 7 stocks from the list of 220 Zacks Rank #1 Strong Buys that has beaten the market more than 2X over with a stunning average gain of +24.3% per year.

These 7 were selected because of their superior potential for immediate breakout.