I see parallels in the current market compared to the tech bubble in the late 1990s, during which solid and defensive income names were passed in favor of high-flying tech names. In this article, I’m focused on AES Corporation (AES), which belongs to the defensive utility sector. I evaluate what makes this an attractive investment at the current valuation. So, let’s get started.

A Look Into AES Corporation

AES Corporation is a Fortune 500 global power company. It provides energy in 14 countries through a diverse portfolio of distribution businesses as well as thermal and renewable generation facilities. Last year, the company generated over $10 billion in total revenue. It currently owns and manages $34 billion in total assets and employs 9,000 people globally. AES derives approximately 85% of its revenues from the U.S., with much of the rest coming from Latin America (8%) and Europe (6%).

What I like about AES is that it is preparing itself for a sustainable energy future through its continued de-carbonization efforts. So far this year, it has announced the sale of 2 GW (Gigawatts) of coal generation, and has signed or was awarded 1.5 GW worth of renewables PPAs (purchase power agreements). This puts the company on track to achieve its plan of adding 2-3 GW of new renewables energy generation each year.

In addition, the company has a 6.2 GW backlog of renewables projects, of which solar and wind power makes up 78% of the total. This puts AES in a solid position to benefit from an acceleration in U.S. renewables growth, with the potential for federal policies change based on the outcome of the November elections. 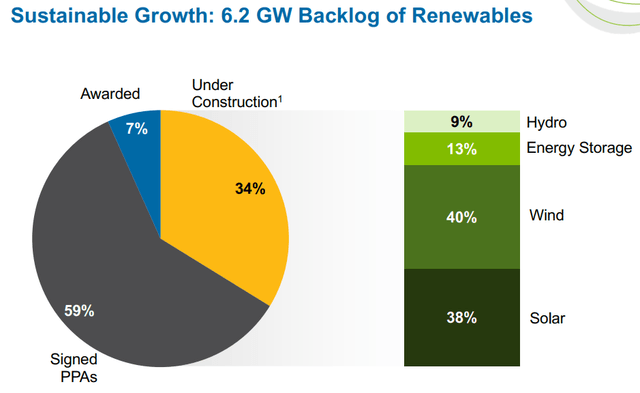 In addition, the company is consolidating its position on existing renewable platforms, as it recently increased its ownership stake in its Brazilian utility, AES Tietê, from 24% to 43%. This acquisition was financed through mostly non-recourse debt, and management expects this transaction to be accretive from day 1.

AES also has additional growth tailwinds from Fluence, which is its jointly formed company with Siemens (OTCPK:SIEGY). Fluence is a well-respected brand in the field of energy storage with a demonstrated track record. It is the global market leader with 2.1 GW of power that’s already been deployed or awarded. It has a presence in 22 countries, with $1 billion in contracted sales pipeline. As seen below, management projects a 45% CAGR in expected energy storage growth through 2025.

Beyond, energy storage, AES also has a promising investment in Uplight, which helps households to improve energy efficiency and also balances energy demand on the grid. This is expected to provide meaningful revenue contributions this year, as noted by management during the latest conference call:

“In 2018, AES invested in Uplight to improve our customer experiences by a digital cloud-based technology. In addition, Uplight provides cloud-based services to third parties to improve energy efficiency and balance system demand. This fast growing business already reaches more than 100 million households and businesses in the U.S., and expects a 20% increase in annual revenue in 2020.”

One of the risks to consider is the company’s elevated debt levels. As of the latest report, net debt stood at $19.5 billion, which is about $500 million higher than where it was at the end of 2019. Management, however, seems committed to maintaining its current debt levels and an investment grade credit rating, as noted during the last conference call:

“At the end of the second quarter, our parent leverage was 3.5 times and our parent free cash flow to debt ratio was 24%, comfortably within the investment grade thresholds of 4 times and 20%, respectively. This highlights once more our credit strength and give us confidence in attaining our second investment grade rating later this year.”

With a global presence, AES also has counterparty risk, especially as it relates to Latin America, where it derives 8% of its revenues. However, this is somewhat mitigated the majority of its exposure there being from either investment-grade rated or sovereign credit, which includes government-owned utilities from the Dominican Republic, Puerto Rico, and Argentina.

Looking forward, I’m encouraged by analyst estimates, which, as seen below, show expected strong growth, especially in 2021 and 2022.

As such, I believe the shares, which currently trade at a blended P/E of 12.9, deserve to trade at a higher valuation, especially considering the growing tailwinds from the renewables investments. As such, I see a blended P/E of 15, which represents a share price of $20.60, as being reasonable. Currently, the average analyst estimate sits at $20.40, with an overall bullish rating of 4.3. 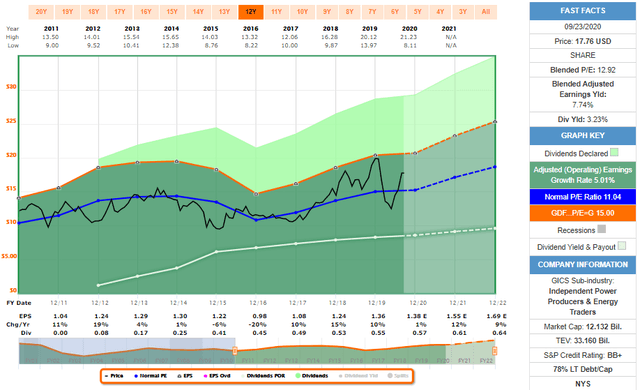 AES Corporation is a global power company that operates in 14 countries. It has a demonstrated record of transforming itself into a sustainable and renewables-oriented power company. This is supported by the company’s latest report, which shows that it is well on its way to achieving its annual target. Looking forward, I see AES’ investments in Fluence and Uplight as being growth drivers, as they are scalable and prepare the company for a renewable future. As demonstrated in the valuation section, I see the shares as being undervalued, with a potential 16% upside.

Additional disclosure: This article is for informational purposes and does not constitute as financial advice. Readers are encouraged and expected to perform their own due diligence prior to making any investment decisions.