AMD has been working on its 3D chiplet technology for quite some time now, but it was back at Computex last year that the company initially showed off its 3D V-Cache in a consumer processor, targeted squarely at gamers. Though the chip AMD CEO Dr. Lisa Su held up on stage was somewhat different than the Ryzen 7 5800X3D we’ll be showing you here today, the technology at play is identical and as you’ll see shortly, it offers significant, tangible benefits to gamers.

The AMD Ryzen 7 5800X3D features 64MB of supplemental L3 cache, that’s bonded to the processor’s compute die, for a grand total of a 96MB of shared L3. The rest of the processor remains essentially unchanged; AMD’s Ryzen 7 5800X3D leverages the same Zen 3 architecture as existing Ryzen 5000 series processors. That massive helping of additional cache gives the chip a distinct advantage over its counterparts, however. Being able to store so much data, so close to the processor cores, minimizes calls out to main memory, which can result in a big boost in performance with some workloads – namely gaming. Why gaming you ask? Because playing a modern PC game frequently requires fetching and loading fresh assets at somewhat unpredictable intervals. With a massive shared cache on a processor, more of those assets can be held close to the processor, and the processor can fetch them from the cache rather going all the way out to main system memory. 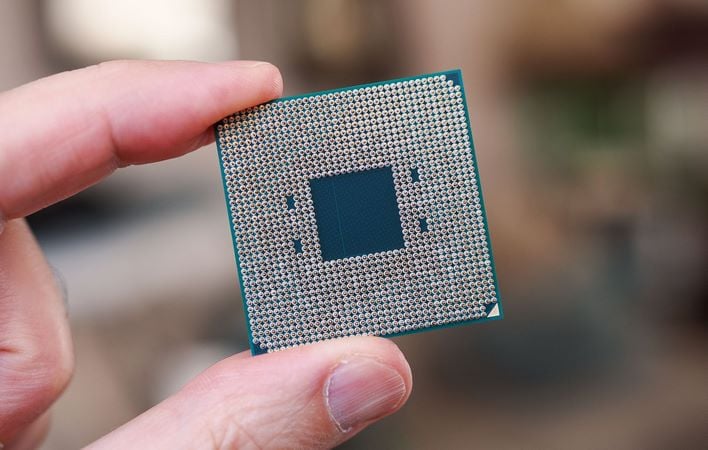 In terms of its main features and specifications, the Ryzen 7 5800X3D doesn’t seem all that remarkable in light of many of AMD’s high-end Ryzen 5000 series processors, save for one particular highlight:

The processor features 8 Zen 3 cores, with support for 16 threads with SMT, with 4MB of L2 cache, 32MB of 2D (traditional) L3 cache, base and boost clocks of 3.4GHz and 4.5GHz, respectively, and a 105W TDP. Those main specifications put the chip just a touch behind the Ryzen 7 5800X, which is similar, but with higher 3.8GHz and 4.7GHz base and boost clocks. The Ryzen 7 5800X3D has that aforementioned 64MB of additional 3D V-cache on board, though, which will alter its performance in applications that benefit from it. 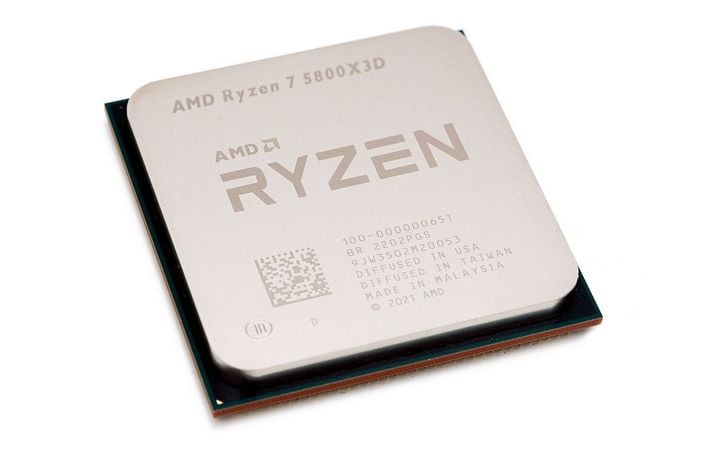 While it’s only select software that will benefit from the huge increase in L3 cache on the Ryzen 7 5800X3D, the entire socket AM4 ecosystem that currently supports Ryzen 5000 series desktop processors will work with the 5800X3D. 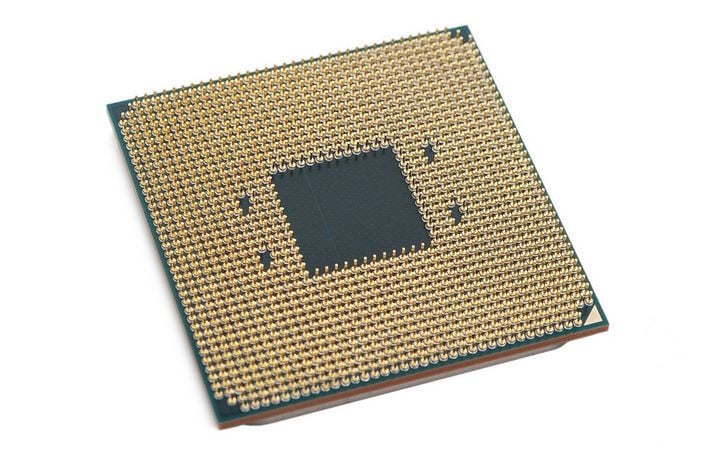 As we’ll explain shortly, AMD has designed the Ryzen 7 5800X3D in such a way that its 3D-stacked dies will work in existing CPU packages and remain compatible with all of the same motherboards and coolers as its mainstream counterparts. AMD’s Ryzen 7 5800X3D uses the very same heat spreader design, and save for its branding, it looks exactly like other Ryzen 5000 series processors, from the top of the bottom. All users will have to do to take advantage of the Ryzen 7 5800X3D is ensure their motherboards have the necessary BIOS installed (with AGESA 1.2.0.6b or newer) and that they’re running an updated version of Windows 11 (2H21 Update, Build 22000.527 or newer), though the chip will run just fine with Windows 10 and other OSes as well.

The Ryzen 7 5800X3D is a special processor; the first of its kind in the consumer space. AMD was able to build this chip in collaboration with TSMC. TSMC obviously plays a major role in the fabrication and manufacturing of the 3D-stacked compute dies used in the Ryzen 7 5800X3D (and EPYC processor featuring 3D V-Cache), but you can’t just bolt that extra cache on a chip without designing an architecture and die with the necessary interconnects and accommodations for it. 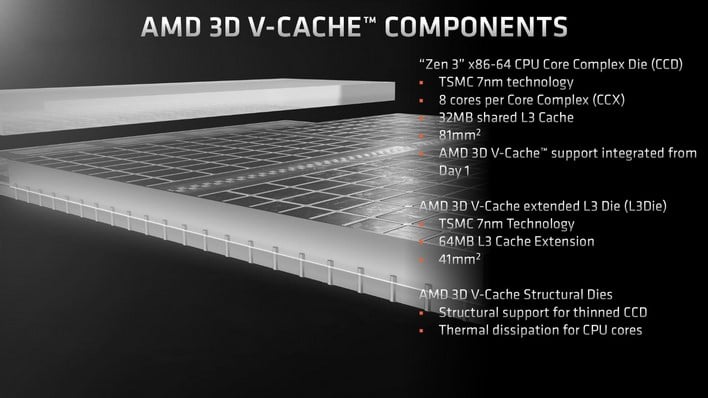 The Ryzen 7 5800X3D is comprised of one 7nm CCD, with an approximate ~80.7mm2 die size and 4.15 billion transistors. The AMD 3D V-Cache die that’s bonded to the CCD is also manufactured at 7nm, but has a die size of 41mm2 consisting of about 4.7 billion transistors. How can it have more transistors and be smaller than the CCD? Because SRAM can be more tightly packed on a die than complex logic. The CCD is connected to one distinct 12nm I/O die, which is about ~125mm2 and contains another 2.09 billion transistors. This is the same I/O die used on existing Ryzen 5000 series Vermeer processors. 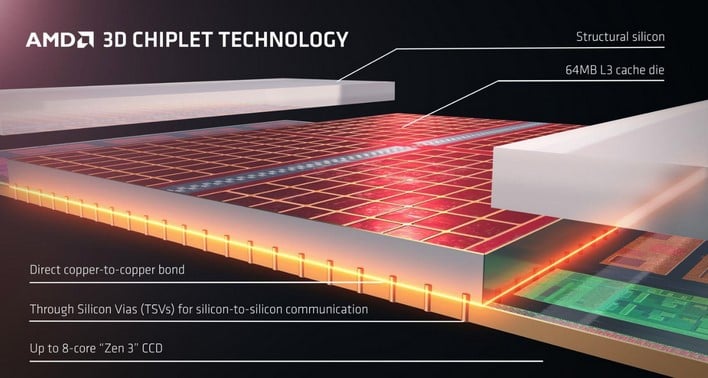 To stack the CCD and 3D V-Cache, but achieve a similar Z-height to existing processors and maintain compatibility, AMD uses chemical mechanical polishing (CMP) to grind the CCD dies down, before attaching the 3D V-Cache. Additional structural silicon flanks the 3D V-Cache die to reinforce the design and ensure a similar overall size, shape, and volume to a standard CCD die. 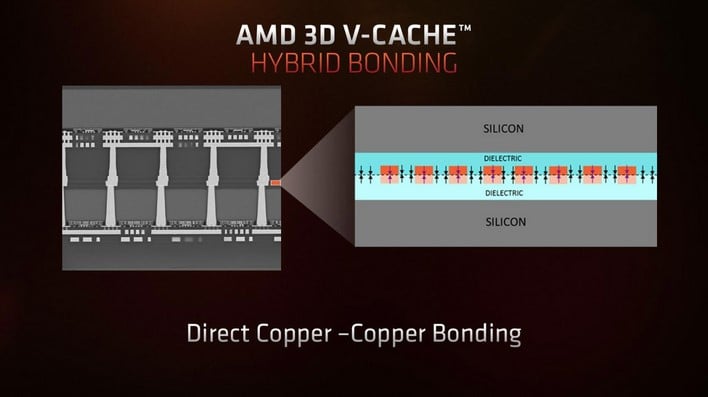 The 3D V-Cache die is molecularly bonded directly to the CCD by van der Waals forces, while through silicon vias (TSVs) are used for signaling and power between the stacked dies. The TSVs used can support up to 2TBps of bandwidth.  In addition to the van der Waals bonding, a second method employs direct copper-to-copper bonding with solid state diffusion. 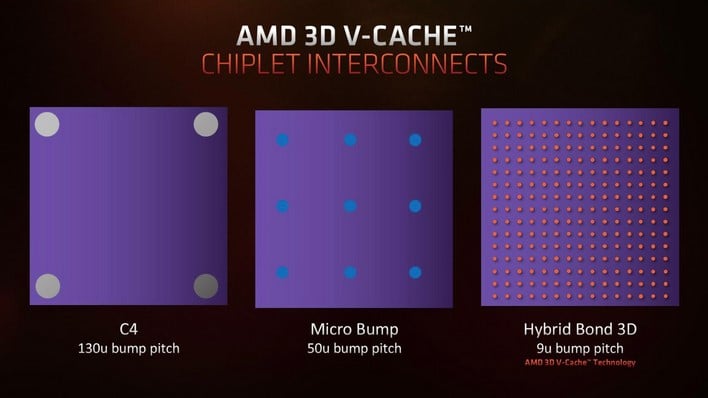 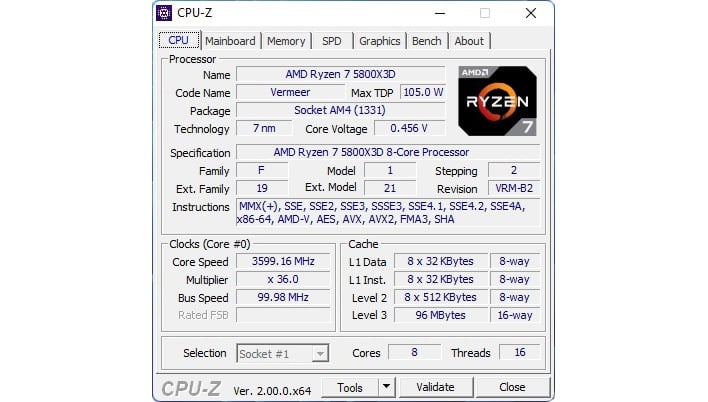 What that all means for the Ryzen 7 5800X3D is a grand total of 96MB of shared L3 cache, in a 105 Watt processor that drops right into existing motherboards, and it behaves just like the current line-up of standard Ryzen 5000 series parts, except when gaming, of course.

Before we dive right into gaming though, let’s find out how the Ryzen 7 5800X3D performs in an array of other benchmarks to see if there are any trade-offs to be made…