In late July, a Congressional subcommittee successfully compelled four major tech company CEOs to formally answer questions over allegedly monopolistic business practices — a public spectacle marred only by COVID-19-related isolation of the attendees. Amazon, Facebook, and Google faced some of the heaviest questioning, but Apple certainly didn’t walk away untouched, as it was peppered with evidence that its App Store was abusing its increasingly dominant position within the software industry.

The “Online Platforms and Market Power” hearing matters because it paved the way for formal antitrust actions against four of the world’s largest companies, technology or otherwise. Individually and collectively, they reach billions of people, with an outsized impact on the hardware, software, and services enterprises and end users rely upon every day. While all four of the tech giants portray themselves as ambitious good actors, there are certainly negative consequences to their actions.

Today, a group of developers announced the formation of a collective Coalition for App Fairness, backed initially by heavy hitters such as Basecamp, Epic Games, Match Group, Spotify, and Tile, as well as the European Publishers Council, News Media Europe, and several other founding members. Having already registered individual complaints with U.S. and European regulators, the group is now calling “for Apple to be held accountable” for price gouging and other anti-competitive policies after “nearly a decade with no oversight, regulation, or fair competition.”

What’s Apple’s latest response to these claims? New marketing. A new App Store promotional page implies that the public just doesn’t understand how benevolent Apple really is, and if they realized how much the company protects users against unsafe and fake content, a 30% cut of developers’ sales mightn’t seem so offensive. 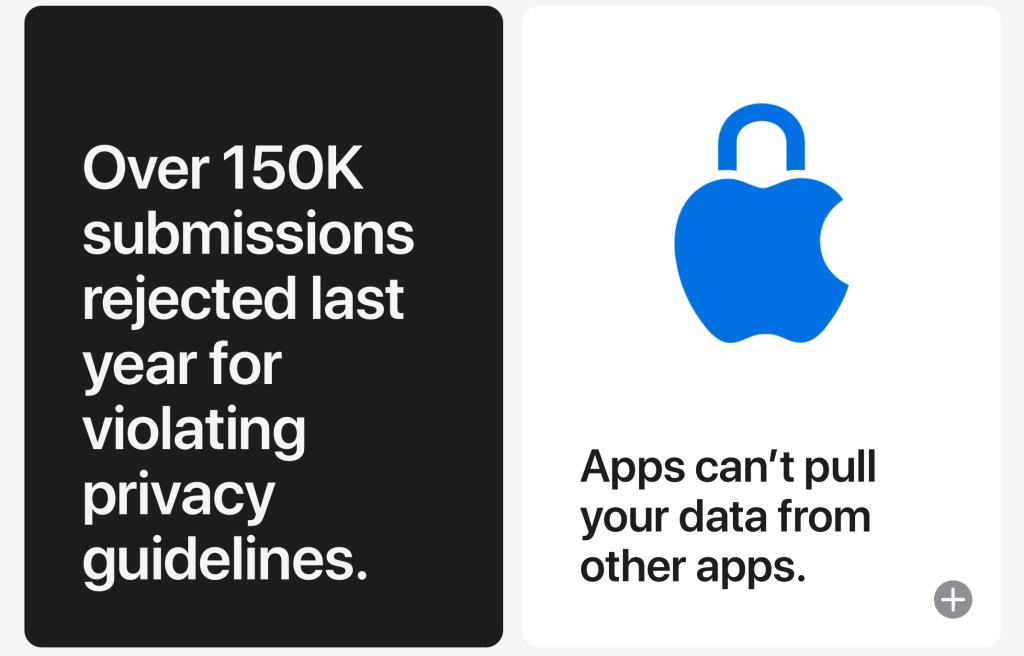 If this sounds familiar, that’s because Facebook’s floating the “we’re misunderstood” defense, too. Empowering profoundly disruptive disinformation and misinformation campaigns? Maybe! But you have no idea how much worse it could have been. It’s a deft parry: Don’t worry about what we’re doing wrong; just focus on what we’re doing right.

So today, Apple wants you to know that the App Store’s 1.8 million apps could have been more bloated — over 2 million apps were removed due to lack of support for Apple’s latest OSes — and even dangerous. Hundreds of actual human beings screen and promote the apps, Apple says, rejecting over 1 million submissions for “objectionable, harmful, unsafe, or illegal content,” and in 2020 alone, deleting “over 60 million user reviews that were considered spam.” Using an automated system, Apple also screened 100% of apps for known malware, preventing them from spreading viruses to users’ devices.

While these data points are sort of interesting, they don’t do much to address the concerns that have rankled developers and regulators. Picture a shopkeeper responding to allegations of bullying suppliers by pointing out how nice his store is. “My shop doesn’t sell dirty stuff,” he might say, “and all of my employees — from salespeople to shelf-stockers — work hard to keep it clean. We even throw out things we can’t sell any more. If you don’t like my shop or my rules, shop somewhere else.”

That’s all well and good, but the regulatory angst isn’t really about the App Store’s pleasant shopping experience. It’s about how Apple deals with developers, and how they in turn feel pressured to substantially raise their prices, ultimately to the detriment of consumers.

No matter how nice Apple’s shop may look and feel, the simple fact is that most of its customers do not have the option to shop elsewhere for compatible apps. Apple has blocked rival app stores on all of its devices except Macs. And in some cases, it has forced multi-platform services to raise the amounts they charge some or all of their customers just to cover Apple’s 30% cut. The only question has been whether that conspicuously appears as a 30% higher charge just for Apple users or gets snuck in as a 15% higher charge spread across all of the service’s customers, regardless of platform.

Apple also suggests that it earns that full 30% by providing developers with all sorts of tools to fill the App Store’s virtual shelves. It doesn’t mention that it also charges developers an annual fee — one that’s arguably artificially small — to access those tools, or that it might need to be sued to prevent it from abruptly yanking one or all of an uncooperative developer’s accounts from the store if it arguably misuses those tools, even imperiling that developer’s global business outside the App Store.

The stakes are arguably even higher in Facebook’s case. Most people know that Facebook’s social network now reaches nearly 3 billion users around the world. But users are only beginning to discover the extent to which Facebook and third parties have abused their personal data — even recently, despite prior mea culpas. A related concern is that seemingly any company or political organization can use Facebook’s advertising and paid promotional platforms to spread information or misinformation to as many people as they can afford to target, a problem with massive public policy and health consequences that Facebook has only halfheartedly addressed.

Following a $5 billion settlement with the Federal Trade Commission over deceptions regarding consumer data gathered from PCs and mobile devices, nine state and D.C. attorneys general are currently investigating “whether Facebook’s actions may have endangered consumer data, reduced the quality of consumers’ choices, or increased the price of advertising.” Undeterred, Facebook is looking forward to mixed reality as the computing platform of the future, and to that end is fully subsuming its once separately managed Oculus mixed reality business. A recent email disclosed that Facebook will officially take legal responsibility for all of Oculus’s user data and platforms on October 11.

Facebook and Apple don’t get along; their CEOs have publicly traded barbs over monetizing users and the respective merits of their platforms. But at this point, neither of the CEOs nor their companies deserves the benefit of being called misunderstood. Facebook has an incredible social platform and excellent VR hardware offset by massive, ever-growing privacy and misinformation problems. Apple creates beautiful products, but nickles and dimes the developers and consumers who support it.

Each of these companies is too big to fail. But they should also be too big to keep playing such petty, anti-consumer games. Far from being misunderstood, Apple and Facebook have given the public enough time to realize who they are and what they’re capable of, positive and negative. Excuses and marketing aren’t going to change that; it’s time for these tech giants to take a long overdue look inward and adopt more sustainable business practices. If they don’t start acting reasonably on their own, regulators are clearly ready to act on users’ behalf sooner rather than later.