Aspen Aerogels (ASPN) recently obtained a patent for the use of carbon aerogels in lithium-sulfur batteries. The patent has the potential to disrupt the electric vehicle and sustainable energy markets.

There is still a lot of research needed to understand how much this technology will improve lithium-sulfur batteries and if it will be enough to replace lithium-ion batteries. Even if it does, this change will happen gradually, but the change’s prospect is enough to be optimistic about the company in the long run.

To understand why lithium-sulfur batteries could replace lithium-ion batteries, we need to understand how these two technologies compare in the 3 key aspects of a battery for the industry: capacity, price, and the number of cycles of the battery.

The new Aspen Aerogels patent is for a carbon Aerogel, which could withstand the expansion of sulfur and provide the conductivity it needs. As shown in a previous article, aerogel structures can be very light in weight while maintaining their strength. 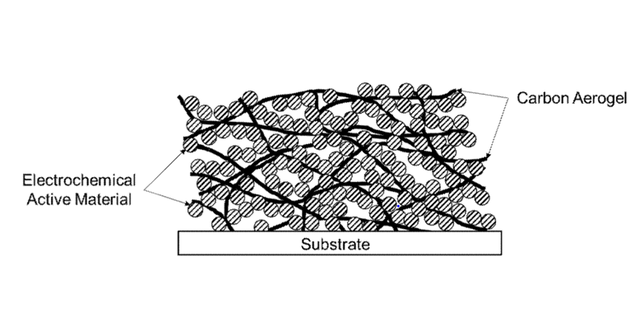 If the patent claims can be scaled and manufactured for industrial purposes, lithium-sulfur batteries could replace lithium-ion batteries this decade, changing the landscape for electric cars and Aspen Aerogels for good.

My past article about the company was in January of this year, and since then, the outlook for 2020 has changed a lot. One of Aerogels’ biggest customers is the oil industry, which was severely affected by the COVID pandemic, especially in the first half of the year. However, besides the pandemic’s impact in 2020, Aspen’s revenue growth forecast for the next four years is similar to what was expected for the company.

These approximations are in line with Aspen Aerogels’ market expectations in the next couple of years, as the image below shows.

I like to use Peter Lynch’s ratio when valuing a stock. This method uses the ratio between the expected earnings growth plus dividends and the stock’s P/E to determine its fair value. A stock that has a 1:1 ratio is reasonably priced. The higher the number, the more underpriced the stock is.

This valuation does not take into account the assets and liabilities of the company. The growth considered in the valuation is the expected growth for the next year, considering iterated growth allows us to analyze better stocks that have uneven growth rates in time.

Constructing an adjusted Beta Pert risk profile for the long term, we can calculate the company’s risk profile.

The risk profile shows there is an 8% probability that Aspen Aerogels will end up trading at a lower price than today. Considering the potential downside, upside, and the likelihood of each, the statistical value of the opportunity of investing now is 49.6%.

The new patent could deliver a significant result for the stock and drastically change the company’s valuation. While the technology is still in the early stages, some interesting research papers suggest that carbon aerogels could provide a defining breakthrough in this technology.

When we talk about batteries, we need to talk about Tesla (TSLA). Elon Musk and Tesla have been at the forefront of battery innovation for many years. The video above shows the battery advancements that Tesla showcased in the last battery day and how the company stacks up against the most prominent battery types that could replace lithium-ion batteries.

In a recent tweet, Elon Musk predicted that the company would reach the 400 Wh/kg capacity milestone in about four years, dangerously close to the theoretical maximum capacity of 420 Wh/kg of lithium-ion batteries. But even with that milestone, to reach the industry goal of 300 miles or more on single charge batteries would need a capacity of 580 Wh/kg.

The capacity required for the 500 miles in a single charge promised by Musk would increase the battery’s capacity requirement to about 900 Wh/kg, almost double the theoretical maximum of lithium-ion batteries. The new Tesla battery should not be thought of as a competitor for the lithium-sulfur battery. Instead, this comparison clearly shows how there are physical limitations for lithium-ion batteries that will be reached well before the customers’ car autonomy needs are reached.

If there is anything in this article you agree or disagree with or would like me to expand further, I would sincerely appreciate you leaving a comment. I will address it as soon as possible.

Disclosure: I am/we are long ASPN. I wrote this article myself, and it expresses my own opinions. I am not receiving compensation for it (other than from Seeking Alpha). I have no business relationship with any company whose stock is mentioned in this article.