MessageBird, a cloud communication platform spanning AI-powered contact center software and APIs for developers, has raised $200 million in a series C round of funding led by Spark Capital. The company has now raised a total of $300 million and is valued at $3 billion.

The Netherlands-based company is perhaps best known for its Twilio-like platform that enables app makers and enterprises to add messaging, voice, SMS, and email functionality to their products through an API (application programming interface). This spares them the resource-intensive task of developing communications infrastructure and makes it easier for companies like Uber to offer text- and voice-based communication features inside their apps.

MessageBird has also been broadening its horizons. Back in March, the company launched Inbox, a cross-channel contact center platform touted as the “Slack for external communications.” Inbox allows companies to receive inbound customer service requests from messaging apps, SMS, voice, and email from a single interface. The platform also leverages AI and automation to detect sentiment and intent, translate between languages, and more.

In the past few years, MessageBird has also launched a chat widget for webpages and apps, enabling customers to contact businesses across WhatsApp, Messenger, Google Business Messaging, Line, WeChat, Telegram, and SMS, among other channels. And it launched a “flow builder” tool for automating tasks such as routing messages or creating auto-replies, as well as programmable conversations, which gives businesses access to all the major messaging platforms through a single API. 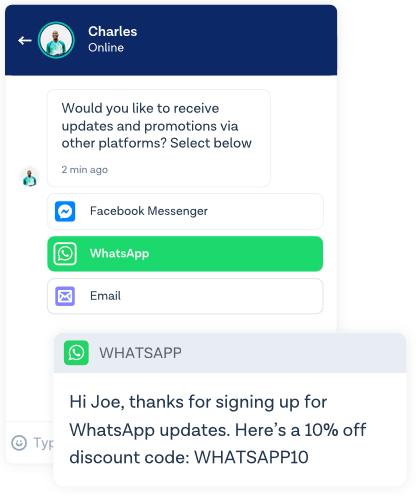 Above: MessageBird: An “omnichannel” chat widget

The COVID-19 crisis has presented businesses with challenges and opportunities, and MessageBird appears to be benefiting from the rapid embrace of ecommerce and other digital services. After all, the transition to working and staying at home requires robust digital communication tools that cater to customers’ preferred channels.

“One-third of our 15,000 customers are now using one or more of our omnichannel products, and we’re seeing the speed of that adoption only increase as every business has been forced to pivot to online-only sales and thus online-only customer support,” MessageBird founder and CEO Robert Vis told VentureBeat. “A true omnichannel experience is about shifting customer engagement away from the inefficient channels of email and voice to more dynamic messaging channels. That requires products for both businesses and consumers to complete the circle of having unified context around every interaction.”

Founded out of Amsterdam in 2011, MessageBird was entirely bootstrapped — and profitable — leading up to its inaugural round of funding in 2017, when it raised $60 million. That round included such notable investors as Accel, Atomico, and Y Combinator, and the company said it was raising the money to expand its voice infrastructure, target growth in the U.S., and move deeper into the enterprise market.

MessageBird already claimed a fairly impressive roster of U.S. clients — including Uber, Facebook, and SAP — and it has since managed to secure major clients across most regions, including Klarna, Mercedes, Orange, Revolut, and Deutsche Telekom in Europe; Alibaba, Tencent, and ByteDance in Asia; Oyo, Alicorp, and Cornershop (soon to be owned by Uber) in Latin America; and Careem (also owned by Uber), Etisalat, and OkaDoc in the Middle East.

“We have definitely been growing steadily in the U.S., but one of our core strengths as a business is that we are the largest omnichannel cloud communications platform by direct connectivity. Thanks to our 250 direct connections with telcos, we can actually reach 7 billion mobile phones directly worldwide,” Vis said. “As a result, we found more and more of our business was from global enterprise businesses requiring large-scale worldwide connectivity in multiple markets, so we tend to emphasize this these days as a particularly attractive USP to U.S. and international companies alike.”

Last year, MessageBird also quietly raised a $40 million series B round from Atomico and Accel that it didn’t disclose until today. “We didn’t need to raise as much [at our series B] due to our rapid growth, so we never disclosed it at the time,” Vis said.

MessageBird will use its fresh cash injection to double down on its core markets across Europe, Asia, and Latin America. The company also has plans to triple the size of its global team to more than 1,000 — this comes hot on the heels of a “work anywhere” policy announced yesterday that essentially allows staff to work from anywhere they like. These plans mirror a trend across the tech industry, with the likes of Facebook and Twitter committing to remote working for the long haul.

Sign up for Funding Weekly to start your week with VB’s top funding stories.