American shale fracking technology, and to a lesser extent Canadian oil sands, enabled easy access to billions of barrels of reserves and ushered in a new “era of energy abundance” driven by way too many producers producing – or capable of producing – way too many molecules. The result was a “no moat” energy sector, margins got clobbered, and energy stocks got hammered. Today, the global oil and gas industry is beholden to state controlled energy companies (Saudi Arabia, Russia, etc.) to withhold millions of barrels of spare production capacity off the market simply to achieve WTI=$40/bbl. Meanwhile, technology companies have flourished as smartphones and CPUs/GPUs continue to evolve to higher levels of sophistication and performance, while emerging technologies like 5G, the cloud, AI, and the IoT (internet-of-things) have become reality. E-commerce and many other technology trends have been pulled forward and accelerated by COVID-19 and the WFH and SFH movements. Data has become essential. Data is the new oil. And it’s been that way for years now.

The result is no surprise and can be seen in a comparison between the Energy Select SPDR ETF (XLE) and the Invesco NASDAQ-100 Index ETF (QQQ) over the past decade: 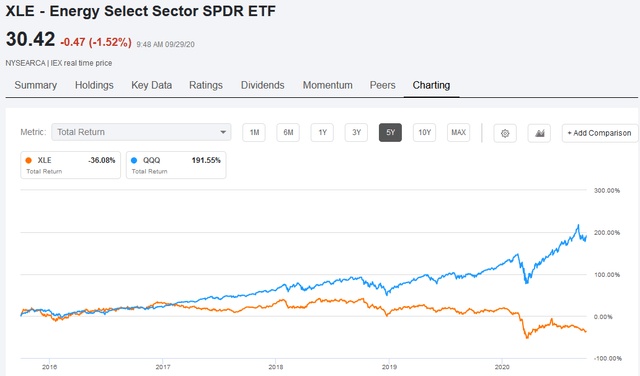 And, of course, this all makes sense. The 21st century will certainly be the century of electronic based technology – much of it software that takes advantage of all the bits-and-bytes of data that is mass collected and analyzed for a multitude of various insightful ways. I have no doubt that five-to-ten years from now all the rage will likely be about specific hardware and software applications that will be figuring out how to take full advantage of the AI systems being built today (i.e. “second order” AI apps). Combined with faster semiconductor technology and new computer architectures, technology (and humans) will continue to evolve at an ever accelerating pace.

Meantime, In The Energy Patch…

Obviously, energy companies are suffering mightily. Exxon (XOM), once one of the most powerful companies on Earth, is reeling and was recently kicked out of the DJIA. The safety of the dividend – once considered sacrosanct – is being called into question. Management’s failure to pragmatically acknowledge the new “era of energy abundance” and global warming shifting global desire for a more renewable energy supply is being severely punished by the market. But, of course, the company’s inability to deliver decent returns also has something to do with it (as do the $10’s of billions of shareholder capital wasted on share buybacks).

Although US oil companies haven’t made any meaningful move into renewable energy, European majors like BP (BP), Shell (RDS.A), and Equinor (EQNR) are shifting their focus to a more renewable based future (see BP Pivots To A Low-Carbon Future and EQNR: Highly Profitable Johan Sverdrup Field Funds Transition To Renewables). Apparently, these companies view long-term PPA contracts for solar and wind power that practically guarantee a low-teens return quite attractive in comparison to the long-term returns on oil and gas E&P in the new “era of energy abundance”.

It’s hard for me to understand Casimiro’s motivation for such statements. Less production from BP and Shell should mean less global oil supply competition for Rosneft and, just perhaps, higher prices and a better future for his company. If he really believed what he is saying, one would think he’d be smiling broadly and keeping his thoughts to himself.

Regardless, there has been some consolidation in the domestic shale patch – including the Occidental Petroleum (OXY) acquisition of Anadarko, which as I correctly predicted has been a disaster (see OXY’s Big Mistake: Overpaying For Energy Resources In An Age Of Energy Abundance). It was exactly the opposite of what the markets want energy companies to do: slim down, become efficient, batten the hatches, and return more cash-flow directly to shareholders in the form of dividends. I expect any further consolidation in the shale patch – simply “to grow” – to also be severely penalized by the market. Any oil and gas company that focuses on “growth for growth’s sake”, whether it is by M&A or large cap-ex spending – will get clobbered. Exxon being exhibit #1 of the latter and an example of exactly what not to do.

Meantime, electric vehicle companies like Tesla (TSLA) and Berkshire Hathaway’s (BRK.A) big investment in battery/EV maker BYD (OTCPK:BYDDF) get lots of press and one would think the global car and truck fleet is now – as in today – mostly electric and that oil demand was plummeting. Nothing could be further from the truth.

In the years prior COVID-19 and after the 2008/2009 US financial crisis, global oil demand was rising at a steady rate to over 100 million bpd: 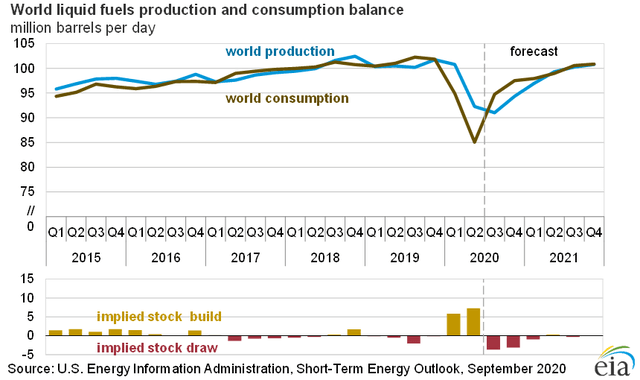 Obviously, COVID-19 demand destruction, particularly in the US and jet-fuel markets, has been historic. However, at some point the planet will move beyond COVID-19, just like it has after all pandemics, and then what? While I think the EIA’s forecast (as seen in the above graphic) is too bullish, at some point global oil demand – pushed by growing economies – will once again be over 100 million bpd.

Yet there is no doubt EV sales of all kinds (cars, buses, and trucks) will continue to grow – and perhaps exponentially so – and will eat into internal combustion engines’ (“ICE”) market share over the coming years. As shown by the chart below, EVs already have been taking a growing share of the global auto market: 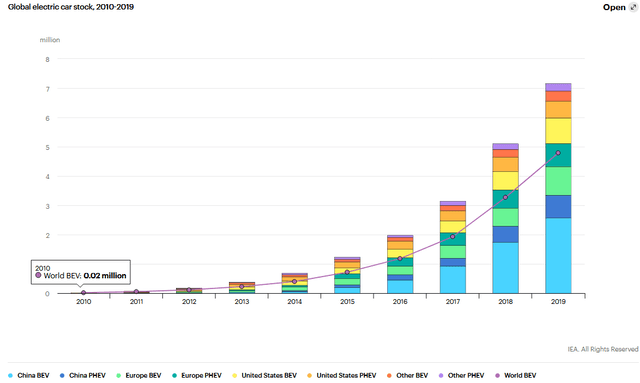 However, consider that in full-year 2019 EV sales represented a mere 2.6% of global sales and equated to only ~1% of the global car and truck fleet.

Now, also consider that prior to COVID-19 US new vehicle sales were over 16 million units/year and near record levels for nearly six consecutive years:

US NEW VEHICLE SALES (in millions): 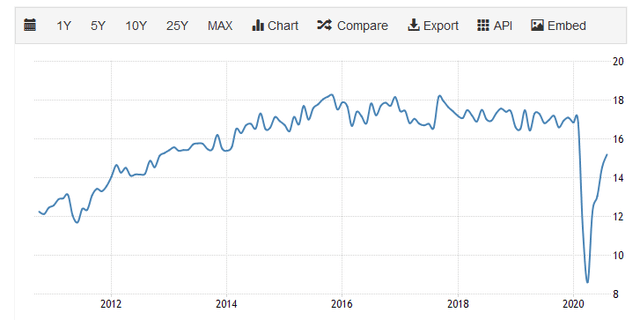 Over the past six years, that’s an aggregate of ~100 million new vehicles on the road in the US alone. And guess what? For full-year 2019, the majority of those new vehicles sales, and the among the fastest-growing segments, were relatively low miles-per-gallon large trucks and SUVs: 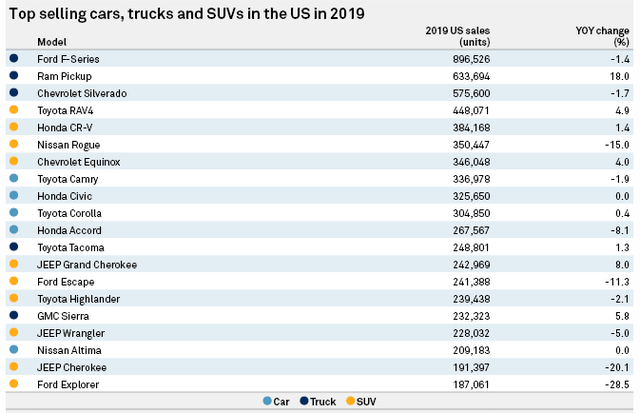 Note the top-three sellers were the large trucks: the Ford F-Series, the RAM pickup, and the Chevy Silverado. This data ties back into the previous chart on rising global oil demand. Indeed, prior to the global pandemic, and despite all the EV headlines and generally higher US fleet mpg standards, gasoline demand in the US had recovered from the 2008/2009 financial crisis and was gradually growing – bumping up against record summer driving season demand of ~9.7 million bpd:

The advent of shale fracking technology led to a sharp reversal in US oil production declines and production started to rapidly increase in earnest in 2012. Fueled by easy money and, at times, high oil prices (remember those?), production skyrocketed from ~5 million bpd to ~13 million bpd prior to the pandemic:

Obviously the massive demand destruction due COVID-19 – and the resulting crash in the price of WTI – has had a huge impact on production. Drilling rigs went idle and were stacked to rust and wait for another day. Production was shut-in by those operators that could afford to do so. As a result, US oil production dropped by ~3 million bpd. But, of course, global oil demand fell by much greater amount than the 3 million bpd, so as stated earlier, US producers are still dependent on state-owned oil companies to withhold significant production capacity from the market just to get any kind of decent price at all. At one point during the crisis in April, an estimated 9.7 million bpd were held off the market.

We may never see US oil production back at 13 million bpd again. And it is going to take a long-time for oil demand to recover from COVID-19. The IATA estimates “Global passenger traffic (revenue passenger kilometers or RPKs) will not return to pre-COVID-19 levels until 2024, a year later than previously projected.”

The “oil patch” is clearly in for a sustained “rough patch” that could last a couple years, maybe more. More than 200 domestic oil companies have already declared bankruptcy – including Chesapeake Energy (OTCPK:CHKAQ), Whiting Petroleum (WLL), and Ultra Petroleum. I have no doubt many more companies will follow in their footsteps – only companies with strong balance sheets and high-quality assets will survive a prolonged downturn in oil (and dry-gas) prices.

The oil patch is certainly down, but not out. The global economy will – at some point – recover from COVID-19. That said, it looks like the US economy may take longer than most to recover given its still high-level of infection and community spread (37,000+ new cases as of yesterday heading into Fall flu and holiday season) due to what arguably was a lack of a top-level strategy to combat the virus. However, eventually oil demand will come back here as well.

While I am certainly a supporter of EVs, we need to be realistic about their current market share and the fact they are a drop-in-the-ocean of the global car and truck fleet: the vast majority of which still – and will for many years to come – run on gasoline and diesel (i.e. oil). Combined with falling investment in exploration and production, and many oil producers going out of business, it sets up for what may be one last oil boom. And it could be a whopper. That’s because COVID-19 did what OPEC+Russia never could really do: put a huge bump-in-the-road for the “U.S. Shale Energy Renaissance” and bring large US oil companies face-to-face with a reality they should have been able to figure out on their own: focusing on production growth in an era of energy abundance is suicidal and a race to the bottom. Going forward, if companies like Exxon and Chevron want to keep from cutting their dividends, they are going to have to cut the massive capital expenditures that have for so long been their modus operandi.

While it very likely will take a few years for this to playout – perhaps even four or five – investors may want to start looking at companies like Chevron (CVX) and ConocoPhillips (COP) now – while they are down (both are currently down ~3% today). But don’t count them out. Both companies have A-rated balance sheets, abundant short-cycle shale assets, and excellent long-cycle LNG and low-cost international oil production.

After all – bits and bytes cannot power your car or truck.

I am reminded of that old Texas saying: “Please God, give me one more oil boom and I promise not to blow it this time”. That’s the “PG” version. If you want the more accurate quote for grownups, read the first paragraph of this 2014 Forbes article.

Disclosure: I am/we are long CVX, COP, XOM. I wrote this article myself, and it expresses my own opinions. I am not receiving compensation for it (other than from Seeking Alpha). I have no business relationship with any company whose stock is mentioned in this article.

Additional disclosure: I am an engineer, not a CFA. The information and data presented in this article were obtained from company documents and/or sources believed to be reliable, but have not been independently verified. Therefore, the author cannot guarantee their accuracy. Please do your own research and contact a qualified investment advisor. I am not responsible for the investment decisions you make.