Apple (NASDAQ:AAPL) has been in the spotlight recently. Not only has its stock soared over the past year, but the company also launched new products last month, including new versions of its Apple Watch and iPad. Apple’s annual iPhone event is expected to take place this month.

Despite all of the attention the tech company is getting, investors may still be underestimating one key catalyst for the company, according to Deutsche Bank analyst Jeriel Ong. Apple’s upcoming rumored debut of a smaller iPhone could spur significant demand for the latest iPhone cycle, Ong believes. 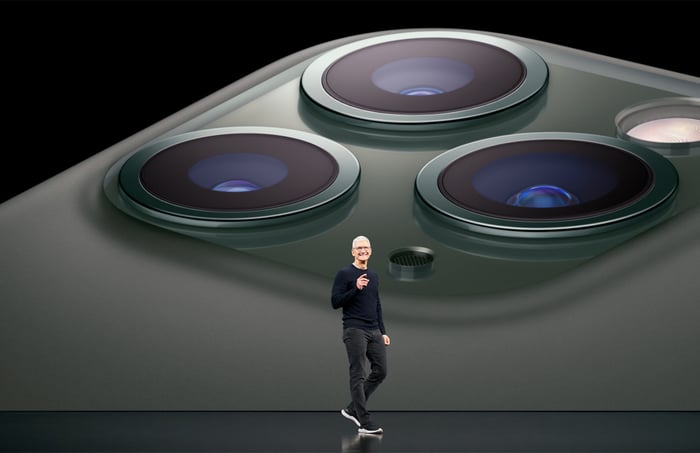 While 5G connectivity is expected to be one of the major selling points of Apple’s upcoming iPhone lineup, there’s another element to these next-generation smartphones that may also help drive sales: a third display size.

Apple’s newest iPhone models are expected to launch in three different display sizes, with one being the company’s largest yet and one being its smallest since the 2016 iPhone SE. The three sizes expected are heights of 5.4, 6.1, and 6.7 inches.

Ong explained in a note to investors this month that the last significant change in screen size for the iPhone lineup, which happened with the iPhone 6 launch, was “well-received.” iPhone unit sales soared 46% and 40% year over year in the two quarters following the launch of iPhone 6 models in late 2014.

Ong believes a 5.4-inch iPhone, which the rumor mill is referring to as the iPhone 12 Mini, could be a key driver of sales for Apple.

The analyst has a buy rating on Apple stock and a $140 12-month price target.

What to expect from Apple’s rumored small iPhone

While Apple’s rumored iPhone 12 Mini may be well-received by some customers just because of its more compact size, the device is expected to lack some of the features included in the iPhones with larger displays. For example, the device is expected to exclude the LiDAR scanner rumored to launch in the larger devices. In addition, the 5.4-inch device is unlikely to have the telephoto lens and larger battery capacities anticipated for the 6.1- and 6.7-inch iPhones.

With the iPhone accounting for more than half of Apple’s trailing-12-month revenue, any meaningful catalyst for the lineup could have a significant positive impact on the tech giant’s overall business results.

Investors should keep in mind that Apple’s rumored iPhone 12 Mini isn’t a sure thing yet. While the rumor mill is often correct about many of the tech giant’s product plans, it’s wrong from time to time as well.