Apple is expected to unveil a smaller, lower-priced HomePod at its digital-only event next week, which has led to speculation about the possibility of a second-generation ‌HomePod‌ also arriving. This morning, however, serial Apple leaker l0vetodream poured cold water on that idea, claiming there will be no “HomePod2” launching beside the rumored “mini” model this year. 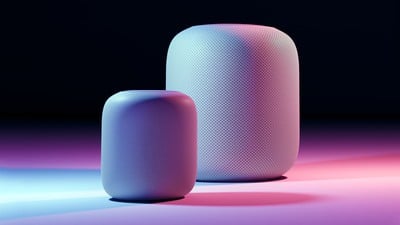 Earlier this year, Apple began allowing employees to purchase up to 10 HomePods at a 50 percent discount, up from the previous limit of two. Some observers had suggested that the larger purchase limit could be part of Apple’s efforts to clear out inventory of the current ‌HomePod‌ ahead of a new model.

Apple may continue to sell the current ‌HomePod‌ alongside the smaller, more affordable version, but it may cut future supply orders for the premium model, which reportedly hasn’t sold very well. Apple has never disclosed ‌HomePod‌ sales, instead grouping the speaker under its “Wearables, Home, and Accessories” category, but the price of the speaker is thought to have been its biggest obstacle.

Apple launched the ‌HomePod‌ in February 2018 with a $349 price tag, but then reduced its price to $299 in April 2019. The ‌HomePod‌ also has several low-priced competitors on the smart assistant front, including Amazon’s fourth-generation Echo ($90) and the recently announced Google Nest ($90).

Apple has been steadily making the ‌HomePod‌ more useful by adding features such as Handoff support, multi-user voice detection, ambient sounds, and multi-room audio. Apple is also expected to add third-party music support to the ‌HomePod‌ in a future software update. The latter feature will presumably allow Spotify and other music services to be set as the default music service, letting users ask Siri to stream music by specifying “with Spotify” at the end of a request.

As for Apple’s rumored smaller ‌HomePod‌, Bloomberg‘s Mark Gurman has suggested the new speaker could include two tweeters, rather than the current model’s seven, in order to drive down costs.