When putting together a well-diversified, long-term portfolio, we can’t always keep ourselves exclusively invested in deep-discount, undervalued sectors. Sometimes, we want to have exposure to an industry, and need to make sure it is, by comparison, fairly priced.

Semiconductors are still hugely important in the modern tech economy. That seems so self-evident that you’d think we wouldn’t need to keep saying it, but as far back as when I was in college, a good 20 years ago, I was hearing that semiconductors were “old tech” and that the future was elsewhere. Yet here we are, and semiconductors are a $400+ billion industry.

There are a lot of plays within semiconductors, but I’m a big fan of the fabless companies. They don’t directly manufacture their designs, which saves a lot of money on production facilities, and makes understanding the business a lot simpler. In particular, I’d like to take a close look at Marvell Technology (NASDAQ:MRVL), which has been showing up favorably in a lot of my screener searches lately.

That said, fabless companies can be a double-edged sword, as they are selling their designs to other companies, and they’ll only sell to the extent that they’re not just good, but good enough to have a compelling reason to use them as opposed to someone else’s design. It can be feast or famine if a product is being extolled as the next best thing, and then someone else comes along with a substantially better equivalent.

Baseband, OCTEONs, and the data-center

Marvell is a market leader in the fabless semiconductor industry, with some market-leading performance solutions in the networking segment, and low-cost storage controllers which have been known for their reliability.

The move to 5nm for its OCTEON processors is a big opportunity as the company tries to move deeper into data center designs. The company’s revenue splits roughly as so on the market. 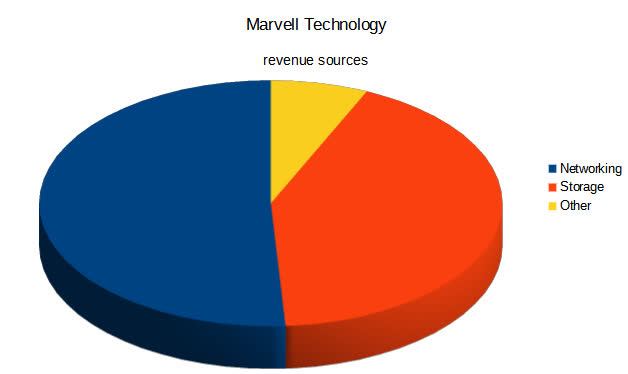 Storage is still very important, as you can see. This had in the past left Marvell dependent on its largest customers for a lot of revenue, with storage majors like Western Digital (NASDAQ:WDC), Toshiba (OTCPK:TOSBF), and Seagate (NASDAQ:STX) each comprising 10%, or more, of Marvell’s overall revenue as recently as 2019. This year, as networking became more important, none of them are over the 10% market, and only Wintech is still considered such a large customer. Big customers are obviously desirable, but it feels safer to not have all its eggs in just a few baskets.

Marvell is a top-tier player in the world of semiconductor design, but that doesn’t mean its new designs can’t fuel growth. Though in recent years net revenue wasn’t leaping around hugely, analysts are projecting nice growth in 2021 and 2022. 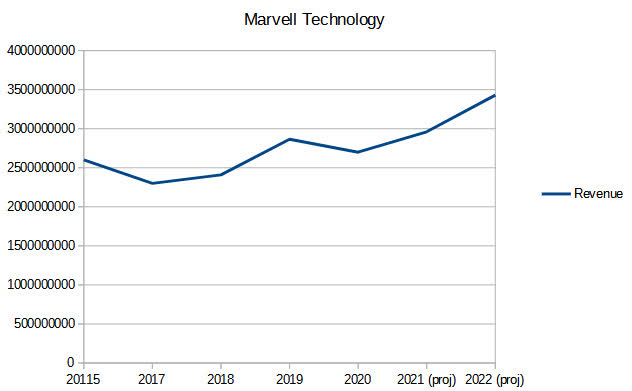 Enhanced revenue comes with enhanced earnings, as expected. If those analyst projections are accurate, by 2022 we’re looking at a PE ratio of 32.15. That an analyst projection of 37.90% growth gives us a sub-1 PEG ratio is a very desirable trait.

Looking at Marvell by the book, we find that our company’s roughly $30 billion market capitalization brings us

That’s not exactly deep discount, but then we probably wouldn’t be expecting it to be so this far up its 52-week range. Since this is a fabless company we’re talking about, Marvell doesn’t need to have a lot of huge factories to run its business, and many of its most valuable properties are designs, which don’t show up so readily on the sheets.

That’s where, in finding if we’re overpaying, it is worthwhile to compare to a market competitor. I chose Broadcom (AVGO) as someone with a similar model that it competes heavily against. Here’s what we find

As you can see, Broadcom is the same, only more so. The Broadcom balance sheet again shows a very responsible cash position, but a huge goodwill that dwarfs the rest of the balance sheet. That’s not surprising, as both companies are constantly acquiring companies to add to their technology.

We might even prefer Marvell’s sheet, as total shareholder equity is somewhat greater than goodwill. The company may not be trading at a cheap price/book, but at least it’s a positive one when goodwill is factored out.

The hope with this huge goodwill, a result of acquisitions, is that Marvell or whomever can amortize the goodwill in such a way as to reduce its tax burden. The risk is that the company really did overpay for whom it acquired, and won’t make money to justify the expense.

In conclusion, even at a 52-week high, Marvell is trading at an entirely justifiable level. If we believe the analysts on their growth projections, there are reasons we may want to own some Marvell stock going forward. For people looking for a big semiconductor player to round out their portfolio, you could do a lot worse.