New technology may help in the fight

Here’s the difference between red tide and blue-green algae.

A new tool will soon be deployed in Florida in an attempt to eliminate blue-green algae in freshwater systems.

“An ultrasonic wave goes through the water and disturbs algal cells, especially some of the blue-green algae,” said Bill Mitsch, director of the research park. “(The algae) thereby loses its ability to stay in the water column and drops to bottom of the lake.”

The Everglades Wetland Research Park will deploy the MPC buoy system in Naples. The solar-powered buoys will be tethered in nine lakes throughout the Treviso Bay Naples community. (Photo: Greg Eiffert)

Mitsch and his team at the research park will set out nine buoys in lakes throughout the Treviso Bay Naples community this December. It’s a small-scale pilot test to see if the technology works.

“Basically, since we have fertilizers in our water, all these lakes are going to eventually have algal blooms,” he said. “If you have a lake and it’s getting water from urban runoff or especially agricultural runoff, you’re going to have a green lake. There’s no getting around it.”

The buoys produce a very low-power ultrasound to affect the buoyancy of the algae.

“They put a little more pressure in the water that (the algae) aren’t used to,” Eiffert said. “As far as affecting other things, they won’t. It’s significantly out of the human hearing range.” 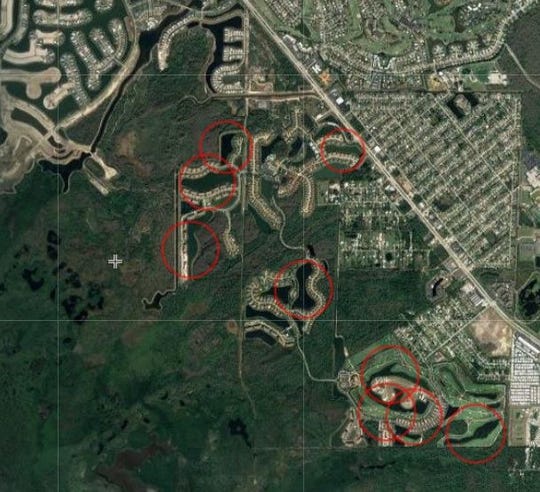 Proposed locations for the buoys are outlined in a map of the Treviso Bay Naples community. (Photo: Provided by Everglades Wetland Research Park)

Because algae are adaptive, the programming of the buoys allows for different frequencies to be used so the technology remains effective. The buoys have been used in 50 different countries, Eiffert said, and the company has taken all that data into account when changing frequencies.

The research park’s grant lasts two years and the buoys will be deployed from December 2020 to December 2021. This ensures the buoys are operational throughout Florida’s wet and dry periods, Mitsch said.

“Our grant is to monitor what these things do and if they are accurate,” Mitsch said. “Florida wants to know if it will measure algae correctly, so the state grant is to test these out and see if they really work.”

The Everglades Wetland Research Park will deploy the MPC buoy system in Naples. The solar-powered buoys will be tethered in nine lakes throughout the Treviso Bay Naples community. (Photo: Greg Eiffert)

Despite the small-scale test, Mitsch said there could be a chance to use them in larger areas if they prove effective.

“We think that it could be used, for example, at the outfall where Lake Okeechobee spills into the Caloosahatchee,” he said. This could prevent algal blooms from spilling down to Southwest Florida’s coast.

While Eiffert said the buoys are effective in smaller bodies of water, using them in the fight against Florida red tide may not be feasible. Eiffert explained that the buoys have a limited range, and in an open water setting like the Gulf, they may not work as effectively.

The buoy systems do however offer more instantaneous water quality monitoring, he said.

“In larger areas where it’s not practical to treat the water, we can monitor that,” Eiffert said. “Our system can actually get a text out in 30 minutes after it identifies a certain algae count or certain parameter. It’s a way to monitor and warn the public sooner that what is considered the norm now.”