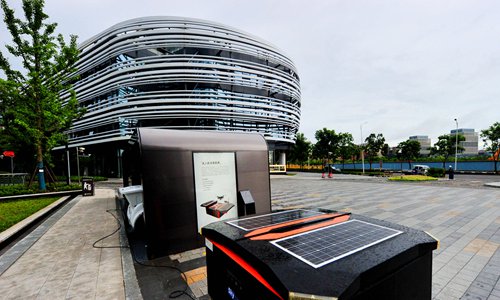 A solar-powered automatic drone charger is seen in the Zhangjiang artificial intelligence (AI) island in Shanghai on Tuesday. The Zhangjiang AI island, covering 100,000 square meters, is expected to be a cluster of AI companies, projects and talent with Microsoft and IBM as the two major participants, media reports said. The island will focus on high-technology sectors like big data, cloud computing and blockchain. Photo: IC

Shanghai’s Pudong New Area, the wealthiest district in China with a per capita GDP of $33,200, higher than that of South Korea, is well on course to lead the nation’s high-tech push, especially in artificial intelligence (AI), with the developer and operator of a smart AI facility revealing plans on Tuesday to generate taxes of 10 billion yuan ($1.47 billion) per annum by 2025.

The local AI ambition, as part of a national effort to win the global AI race, is considered of pivotal significance to defend the nation against mounting concerns over a global technology split, analysts said.

In the arena of AI, one-third of the city’s AI enterprises are located in Pudong, where an AI island stands out as a technology landmark.

The smart AI island, located at the core of the Zhangjiang Science City in Pudong, covers 100,000 square meters. The island, the nation’s first demonstration park for full-scenario commercial use of 5G plus AI, houses foreign tech giants including IBM, Microsoft and Infineon as well as Chinese unicorns such as Alibaba’s chip subsidiary Pingtouge and CloudWalk.

In a statement sent to the Global Times on Tuesday, Shanghai Zhangjiang Group, the developer and operator of the regional AI hub, disclosed that the island will house 100 companies by the end of the year with more than 4,000 researchers working here.

The city didn’t even unveil plans for the creation of the smart AI island until April 2018.

With the support from Zhangjiang Group, Microsoft established its largest AI and Internet of Things (IoT) Insider Lab on Zhangjiang’s AI island in May 2019, aiming to provide AI and IoT solutions to enterprises based on its cloud computing services called Windows Azure.

Such support, and an open attitude toward foreign companies and technologies, have advanced the expansion of the AI industry in the area and development of the whole field, Zhu noted.

“Moreover, Chinese companies have many innovative ideas and propositions that are not used overseas yet. We feel glad to work with them to create different AI scenarios with Microsoft’s platform and bring these outcomes to more companies or users,” Zhu said.

Since its establishment, the four-story lab has brought 90 enterprises onboard, including international companies and start-ups from Zhangjiang and other Chinese cities.

Speaking at an online smart industry expo in mid-September, Vice Minister of Industry and Information Technology Wang Zhijun revealed that China’s core AI industries, with 2,600 companies, hit 51 billion yuan as of the end of last year.

The nation has made partial breakthroughs in applied algorithms, dedicated chips, and open platforms while its image and voice recognition – among other application technologies – have become the world’s most advanced, Wang said.

Microsoft’s Zhu also holds an optimistic attitude toward China’s AI industry. “China has an advanced awareness in AI education. It is attracting talent from home and abroad, and it is also stepping up infrastructure construction for the development of the AI industry, such as 5G and data center construction.”

In the words of Huang Qifan, an influential economist and former mayor of Southwest China’s Chongqing Municipality, the nation’s push for new infrastructure, in which AI plays an important role, lays the groundwork for the nation’s industrial and institutional innovation.

Consequently, new industries and business models are set to come into being, and the efficiency of social governance will also continue to improve, Huang told a forum in Shanghai last week. The wealth effect in the digital era will propel China’s GDP to lead the world and push for the nation to lead the digital revolution, he noted.