The Keychron K2 version 2 is the same mechanical keyboard you love with some new upgrades, including better connectivity and ergonomics.

If you’ve used a Keychron keyboard before the K2 version 2 will be instantly familiar. The new model didn’t change the key layout or overall typing experience, but what was altered is welcome to the already well-rounded keyboard.

The original Keychron K2 had a flat base with two feet that could be opened to increase the height and angle of the keyboard slightly. The second version took this design and made it more configurable.

The Keychron K2 version 2 has an angle in the base, which makes the keyboard sit at an angle to the user naturally. The feet on the bottom have two different angles that can be set to give the user much more choice while working.

When the larger feet are in use, the keys sit at a 9-degree angle. 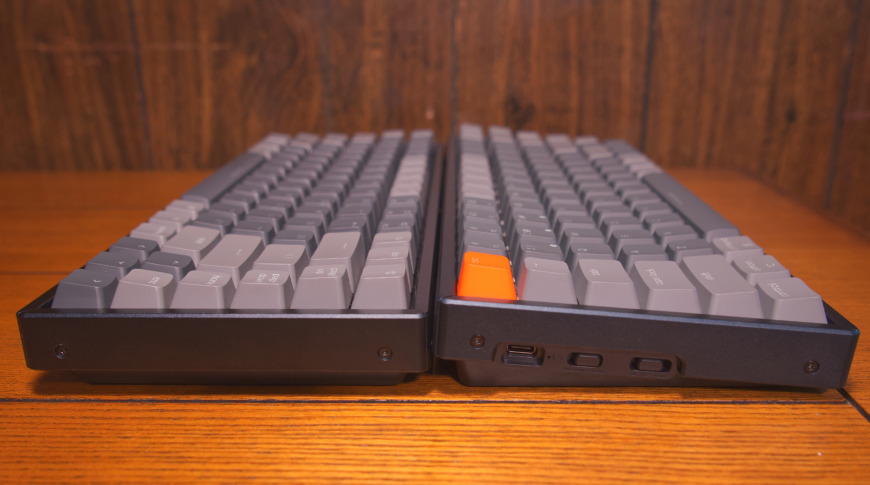 The Keychron K2 version 2 (right) has a 9-degree slope

These tweaks may seem small, but can go a long way for comfort and ergonomics. The new slope makes the tall keyboard feel a little less tall which better accommodates some typing positions or wrist rests.

The left side of the keyboard has tactile switches instead of the old mushy ones from the previous generation. This makes switching between Windows and macOS much easier with a solid click.

Users can order the Keychron K2 version 2 with a white backlight or RGB backlight, an aluminum frame or plastic frame, or change to PBT keycaps. These are all configurable when ordering.

It is worth noting the aluminum frame makes the case feel more weighted and sturdy, but it is just an aluminum frame laid over the existing plastic case.

The external design wasn’t all that was addressed in version 2. The keyboard now has Bluetooth 5.1 which is faster and more reliable than the Bluetooth 3.0 support that came before.

The three-device connection is still available in the Keychron K2 version 2, where you press and hold the Fn key and select 1,2, or 3 to switch between devices. Testing has shown it to be a faster switch than the previous model, with seemingly no issues with connection. 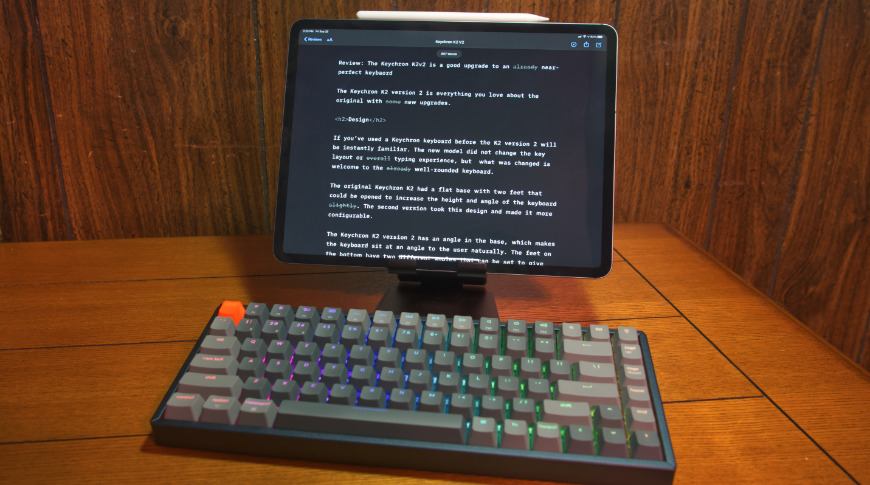 Perhaps the most notable change to the user experience is a dedicated caps lock backlight. Previously users had no indication if caps lock was in use, but now the key will stay solid and not be affected by the RGB effects when caps lock is in use.

The battery size didn’t change, though its battery is still one of the biggest found in a wireless keyboard at 4,000mAh. Keychron rates the battery life at 240 hours of use without the backlight, or 72 hours with the backlight or RBG effects on.

While testing this keyboard we switched between wired and wireless configurations and was never in danger of running out of battery.

The keys were not changed for this version and have the same ratings and configurations, with the dome-switch keys able to last for an estimated 50-million keystrokes. Users can configure the keyboard with red, blue, or brown Gateron switches when ordering, which vary in terms of characteristics.

Red switches tend to have the quietest click and a soft key press during typing, while blue switches tend to be the loudest and require more force to depress the keys. Brown switches fall in the middle of the other two switch types offered.

The company suggests red switches are suitable for office use and gaming, blue is best suited for typists, and brown for “midway gaming/office.”

I opted for the red switches and the aluminum frame with RGB colors. The keys are responsive and clicky with good travel.

The experience of using the Keychron K2 version 2 is basically the same as using the first version, though the angled base was more comfortable in some typing situations. A wrist rest is recommended when sitting at a desk since the case is relatively tall, even with the increased angle.

The Bluetooth switching between a Mac mini, iPad Pro, and iPad mini was noticeably faster than the first version, though it’s not life-changing.

You can still connect via a USB-C cable that is included in the box. The new cable is shorter and braided, which was a welcome change for my particular desk setup.

When using the keyboard you can change between 15 RGB patterns, and can move between those patterns with specific colors using key combinations. The top-right key with a lightbulb image changes the pattern, and holding down Fn while pressing arrow keys changes the color used in the pattern.

Those looking to customize their mechanical keyboards may have trouble finding keys to fit some of the more unusual key shapes on this keyboard. That being said, the keys are easy to switch out and a tool is included in the box to do so.

Should you buy the Keychron K2v2?

Owners of the original Keychron K2 should not feel pressured to upgrade. While the version 2’s changes were welcome, they do not add to the overall experience from the first edition enough to justify an upgrade.

The Keychron K2 version 2 is the perfect keyboard for first-time mechanical keyboard buyers. The compact design is great for portability and doesn’t crowd the desk.