State given ideas for growing tech 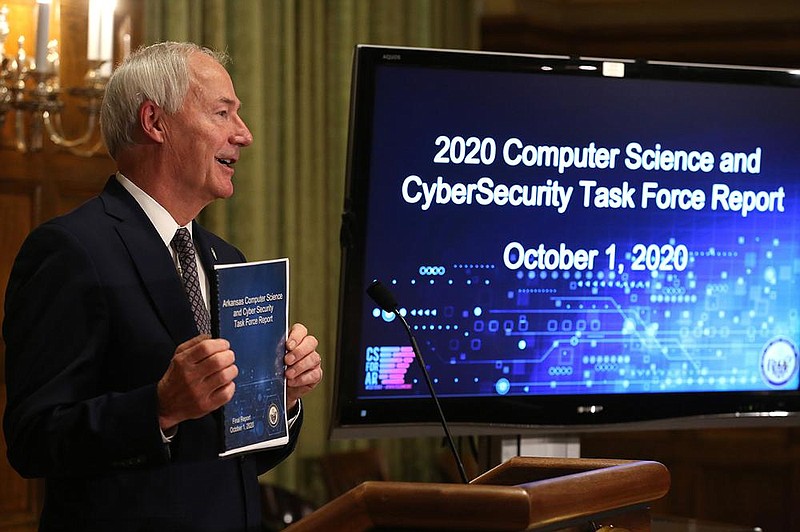 Gov. Asa Hutchinson shows the report from the 2020 Computer Science and CyberSecurity Task Force on Thursday during a news conference at the state Capitol. More photos at www.arkansasonline.com/102computer/.
(Arkansas Democrat-Gazette/Thomas Metthe)

Gov. Asa Hutchinson said he will soon announce initiatives to attract more tech workers to the state, including Arkansans who have established tech careers outside Arkansas, which is among the recommendations from an Arkansas Computer Science and Cybersecurity Task Force report released Thursday.

Other recommendations contained in the report in a bid to assist the high-tech industry in Arkansas include creating a computer science infrastructure fund to encourage high-tech companies to relocate to the state and a database of state computer professionals that can give the industry a quick way to assess the depth of the state’s talent level in electrical engineers and other computer science professionals.

Hutchinson also used Thursday’s news conference to announce that T-Mobile is donating to the state more than 18,000 Internet-access devices and supplying each eligible user with 100 gigabytes of data annually for five years as part of the wireless provider’s 10Million program, a nationwide initiative to help increase access in rural areas.

[Video not showing up above? Click here to view » https://www.youtube.com/watch?v=WRthOezhT6Y]

He also disclosed that the state is investing additional money to boost broadband speed in the state’s high schools to about 1 megabyte per second, or about five times faster than the speed the broadband network is now. Hutchinson said it would be in place by July 2021.

The governor created the 35-member task force by executive order almost one year ago to keep the momentum created by Arkansas’ increasing recognition as a leader in computer education. The task force itself is an extension of the Computer Science and Technology in Public School Task Force that the General Assembly created in 2015.

“This report really sets the stage for Arkansas’ future both in terms of technology education but also in terms of partnering with industry and private sector, increasing the training of teachers,” Hutchinson said. “We look forward to being a national leader of this additional phase, this new phase of computer science education and the creation of jobs here in Arkansas.”

“We have not seen the same level of growth,” Hutchinson said.

He acknowledge the report’s recommendations won’t be implemented “overnight,” adding that, in some cases, they will need legislative approval and two or three years to implement.

But the governor said he believes others, such as attracting industry talent, can be accomplished sooner.

“In terms of attracting talent here I have some specific announcements that are not ready today but have plans to do that, to give more tools to industry to attract that talent,” Hutchinson said.

He called the nonprofit Arkansas Center for Data Sciences a “critical link” in developing ways to attract and retain high-tech talent. The report recommends “expanding support” for the center.

Developing a database of that talent also is critical, the governor said.

“We have to be able to show industry our capacity in certifications of tech talent so that whenever we’re attracting industry here, they can look at a database and say you have ‘X’ number of certified technicians or those that have computer science degrees or electrical engineering degrees,” he said. “It’s about being able to demonstrate our inventory of talent in this state.”

Anna Beth Gorman, executive director of the Women’s Foundation of Arkansas, served on the task force. She said that it was important for language on diversity and inclusion made in into the report “to make sure under-represented communities have opportunities. And if Arkansas is to be competitive in the national and global economy, we have work to do and we’re going to do it.”