The tech sector has been trending lower since the beginning of September and finally saw a gain in the past week, halting a three-week losing streak. Lam Research (LRCX) started falling a little earlier and ended up falling for six weeks, until it bounced back two weeks ago and then really jumped this past week. Looking at the weekly chart for the stock, the drop seems to have stopped at the 52-week moving average. 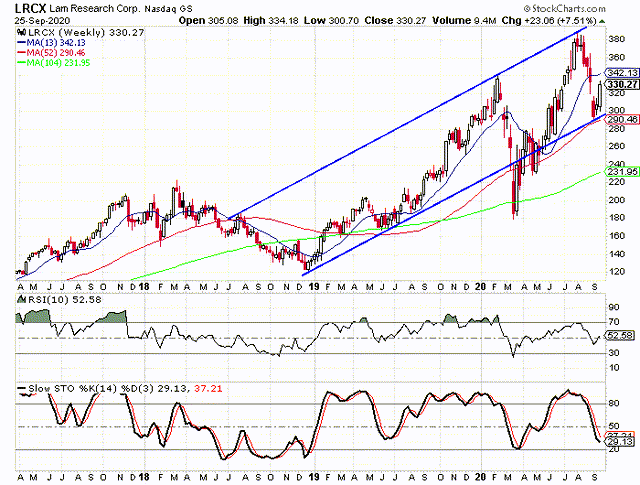 Looking at the chart a little more closely, I saw a trend channel of sorts. The lows from late 2018 and in the middle of 2019 connect with the recent low. The drop and recovery from February through May took the stock out of the channel, but that period in the market was somewhat of a black swan event. We also see that the highs from July ’18, February ’20, and August ’20 all connect to form the upper rail.

If we look at the overbought/oversold indicators, the 10-week RSI hasn’t been below the 50 level very much in the year and a half. The indicator did drop briefly below that level two weeks ago, and it has already moved back above it. The stochastic indicators have only dropped below the 50-level on three occasions since moving above it in early 2019. The indicators are there now, and they look like they are ready to reverse course in the next week or two.

The Fundamentals Support the Bullish Case

Lam Research ranks very well when it comes to several fundamental indicators. The company saw earnings jump by 32% in the fiscal fourth quarter as revenue jumped 18%. Earnings have increased at a rate of 8% per year over the last three years, while revenue has increased by 3% per year.

Lam will report again in late October, and that will be the fiscal first quarter of 2021. The company is a little different in that it doesn’t refer to its quarters as Q1 or Q2, but rather, it calls them by the month – June quarter, March quarter, etc.

For 2021, analysts expect earnings to increase by 31%, while revenue is expected to jump by 23.8%. Lam should report again in late October, and the current consensus estimate is for EPS of $5.19. That estimate is 63.2% higher than the $3.18 the company reported in the September quarter of last year. Revenue is expected to come in at $3.11 billion, and that is up 43.5% from last year.

Two other areas where Lam fares extremely well are in its return on equity and profit margin. The company’s ROE is at 48.2% and the profit margin is at 26.2%. Both of these figures are well above average.

The Sentiment is Skewed to the Bullish Side, but It Seems Warranted

There are 25 analysts following the stock currently, with 21 “Buy” ratings and four “Hold” ratings. This gives us a buy percentage of 84%, while the average buy percentage falls in the 65-75% range. Analysts have become a little more bullish in the last few months, as the Buy percentage was at 80% three months ago. 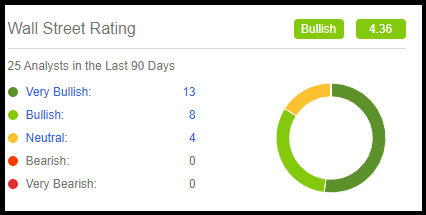 The short interest ratio is at 2.04 currently, and that is in the middle of its readings over the past six months. The reading is a little lower than the average stock, but it is considerably higher than it was at the end of February. The ratio has fallen from 3.77 to the current reading in the last month, but the main reason is an increase in trading volume rather than a drop in short interest. It would be more of a sign of bullish sentiment increasing if the short interest had fallen.

Of the three sentiment indicators that I watch most closely, only the put/call ratio is reflecting any sort of pessimism. There are 44,267 puts open at this time and 34,305 calls. This gives us a ratio of 1.29, and that is a little higher than the ratio for the average stock.

My Overall Take on Lam Research

Like I expressed before, I love finding stocks that have bearish sentiment toward them, and yet, the fundamentals and technical picture are bullish. In the case of Lam Research, the bullish sentiment seems to be warranted, as the fundamentals are really good and the chart shows how the stock has trended higher in recent years.

The recent pullback brought the stock down near its 52-week moving average, and it brought the weekly stochastic readings down to the 30 range. The last time we saw this on the chart was in the second quarter of 2019, and from there, the stock doubled in the next eight months.

I don’t expect Lam Research stock to double in the next eight months, as I think the overall economic environment is going to be much tougher than what we saw in 2018 and 2019. I can see the stock rising 50% from its recent low over the next six to nine months, and that would put it in the $440 range.

If you would like to learn more about protecting and growing your portfolio in all market environments, please consider joining The Hedged Alpha Strategy.

One or two option recommendations per month

A weekly update with my views on the market, events to keep an eye on, and updates on active recommendations