As of Friday, June 30, the science division of the White House’s Office of Science and Technology Policy (OSTP) was completely unstaffed, as the three remaining employees left the building, reported CBS News. “Science division out. Mic drop,” tweeted one of those employees, Elle Celeste. The disregard for scientific inquiry and opinion at the highest level of the land has MIT Technology Review Associate Editor Mike Orcutt worried. As he notes in an article published today, it is “only the latest indication that the Trump White House is not concerned that science and technology experts be part of its day-to-day decision making.” 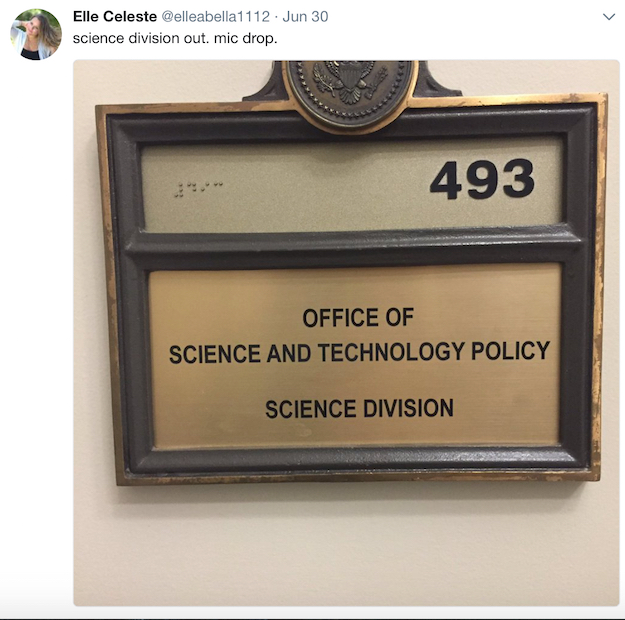 As plastics professionals, you have to reckon with science pretty much on a daily basis. It determines material properties and how things get made. It seems to me that science also should have a seat at the White House table when decisions are being made, if only as a counterpoint to members of the executive branch, like climate change skeptic Scott Pruitt, who heads the Environmental Protection Agency.

All of the senior science positions in the OSTP currently are unfilled and it is still without a director, writes Orcutt. An administration official has responded that the office has plenty of PhDs on staff “that are working on science,” but Trump’s OSTP is currently made up of 35 staffers compared with more than 100 under Obama, notes Orcutt. The size of the staff, which almost doubled under Obama compared with previous administrations, reflected his strong belief in science and the growing intersection of science and technology in a range of policy issues, one Obama-era staffer told CBS News. Anyone involved in advanced manufacturing, as many of you are, could hardly disagree on the objective truth of that intersection. It drives the future of the industrial fabric of our country. As an aside, it is worth noting that advanced manufacturing will create millions of jobs—far more than coal mining—but it needs a young workforce steeped in science, technology, engineering and mathematics (STEM) education and training. The proper role of government in all of these endeavors, of course, can be debated, but I think we can all agree that a focus on science and technology—and not just mercantilism—is critical for the future of our country.

Created in 1976, the OSTP was established to provide the president with objective scientific advice on given issues independent of the political agendas of government agencies. Under Obama, it played a significant role promoting research into personalized medicine and cancer, among other things.

As Orcutt notes in his article, every president since FDR has had a science advisor. There are no indications that Trump will have one any time soon. Is that a “gaping, dangerous hole,” to use Orcutt’s phraseology? Personally, I think even a relatively brief conversation with a scientific mind could be beneficial to the president. Given that he reportedly watches more than five hours of TV every day—or is that fake news?—it seems like he might be able to find the time.