This year’s monsoon season in Las Vegas? More like a ‘nonsoon’ 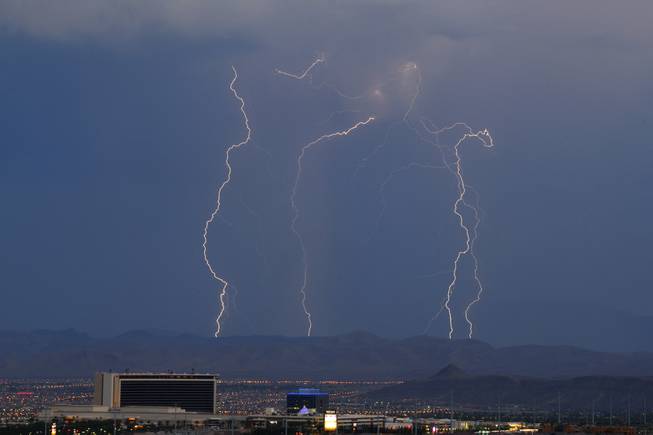 The monsoon season — that period from mid-June through September that each year brings rains to the Mojave Desert and other areas of the Southwest from the tropical coast of Mexico — has been a dud this year.

Las Vegas is in the middle of a record-breaking stretch without rain, and residents should be prepared for it to stay that way, scientists say.

Although there have been small pockets of precipitation in the Valley, including a brief sprinkle Monday in parts of Henderson, there has been no rain measured at McCarran International Airport, home of the National Weather Service’s Las Vegas rain gauge, since April 20.

On Sept. 18, that stretch at McCarran hit 150 days, which broke the previous record set in 1959. Matt Lachniet, a professor of geoscience at UNLV, said that it is not “altogether uncommon” for the monsoon to fail.

“There have been other summers when the monsoon has been a ‘nonsoon,’” Lachniet said, citing years including 1962 and 2010.

Lachniet said it’s a bit early to attribute this year’s lack of precipitation to climate change, calling it a “change in the weather.” He said a high pressure system over the Southwest has stayed stable, blocking any significant amount of moisture.

There were monsoon failures in the 1960s and 1970s, he said, before climate change impacts were as strongly felt as they are now.

“What we can say is that it’s getting warmer, so that the water that does fall in the monsoon is more likely to evaporate away,” Lachniet said. “Climate change is influencing the amount of water available when there is water. Of course when there’s zero monsoon, then there’s zero water.”

Lachniet said in the 1990s there was a four-year period where the monsoon season brought a half and inch of rain or less, the longest such stretch he was aware of. If a lack of rain started pushing seven to nine years, Lachniet said, it could signal climate change affects.

Patrick Donnelly, the Nevada state director at the Center for Biological Diversity, said the dearth of monsoon rains could be devastating to desert species.

“It’s not just oh, this bird or this big horned sheep needs a drink of water, it’s thirsty,’” Donnelly said. “’We’re dealing with extremely complex systems that have adapted to kind of baseline climate conditions over millennia.”

As an example, Donnelly talked about a recent situation in New Mexico, where thousands of birds fell out of the sky dead.

One of the theories as to why the birds died was that a lack of a productive monsoon season led to a decreased insect population, cutting into the birds’ food supply. It’s an example, Donnelly said, of how precipitation goes further than just providing water sources directly for a species.

El Niño and La Niña, two phases of a climate cycle referred to as the El Niño/Southern Oscillation, affect moisture conditions in the Southwest and elsewhere. During El Niño conditions, the Pacific Ocean warms, and during La Niña conditions, it cools.

Currently, the Pacific is starting to move into a La Niña, Lachniet said, which usually means drier winters.

“I expect that this dry trend is going to continue into the spring of next year if conditions continue,” Lachniet said.

This is not the driest Nevada has been, Lachniet said. Some of his recent research has shown that between 5,000 and 9,000 years ago, the area was much hotter and drier due to a sustained La Niña-like and a warmer Arctic, which caused weather patterns in middle latitudes to become drier.

“Climate is an interconnected system, so changes in one location can influence another location,” Lachniet said.

Due to Las Vegas’ reliance on Rocky Mountain snowmelt and the subsequent filling of the Colorado River, a lack of precipitation in Southern Nevada is unlikely to greatly affect water availability for residents.

Corey Enus, a spokesperson with the Las Vegas Valley Water District, said that water saving measures are in place, including watering hours, and that water use has decreased by 50 million gallons in Las Vegas over the past three weeks.

The reliance on water from snowmelt, he said, is a much bigger factor than local precipitation.

“It’s not necessarily going to be impact by the precipitation or the lack of precipitation that we see here in the Las Vegas Valley,” Enus said.