Photographer and “mad scientist” Don Komarechka is back for a DPReview TV episode on ultraviolet light. Specifically, he explains how a modified camera-and-filter combination can reveal hidden ultraviolet patterns that are invisible to the human eye, but crucial for pollinators like bees.

Human trichromatic vision is limited to the so-called “visible” portion of the electromagnetic spectrum, but the spectrum doesn’t simply stop at those boundaries. Immediately adjacent to the visible light spectrum is near-infrared and infrared on one end, and ultraviolet on the other, both of which can be captured using specially-modified cameras.

We’ve featured infrared photography many times before, but in this video, Komarechka heads over to the other end to reveal the hidden world of ultraviolet light. Specifically, he shows you the hidden patterns that pollinators like bees use to home in on certain flowers. The results can be downright shocking: 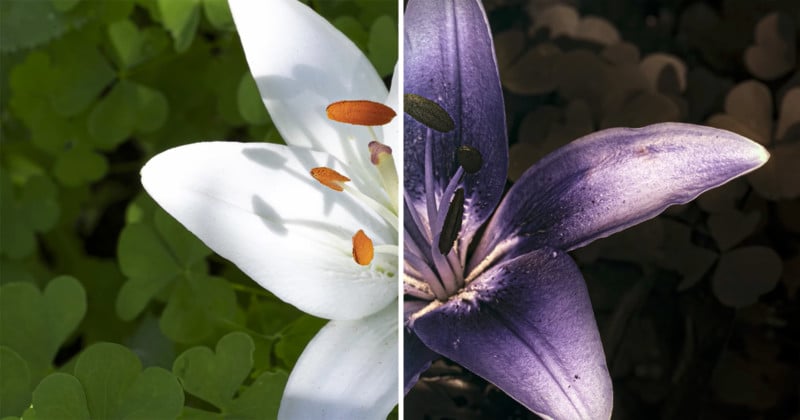 From streaks leading to the pollen source, to big fat ultraviolet landing pads, these patterns are completely invisible to the naked human eye, but they play a crucial role in the plant kingdom. As Komarechka demonstrates over and over, much like macro photography, a special ultraviolet camera-and-filter combination can reveal beautiful new worlds that have been hiding in your backyard or garden all along.

As a bonus, the camera can also reveal the protective power of sunscreen in pretty stark terms… a trick that has gone viral a few times before:

To learn more about ultraviolet light and ultraviolet photography, and see many more fascinating before-and-after photos of “monochromatic” flowers that aren’t, check out the full DPReview TV episode above.

And if you want to see more uses for ultraviolet photography, check out these ultraviolet portraits we featured back in 2017.