Figure 1: Performance of VGT and QQQ

Now, both VGT and QQQ are dominated by big companies in the technology sector such as Apple (NASDAQ: AAPL) and Microsoft (NASDAQ: MSFT) which form both ETFs’ largest two holdings respectively.

On the other hand, these two ETFs differ widely as to the other constituents with QQQ being significantly exposed to GAF meaning Google (NASDAQ: GOOG) (NASDAQ:GOOGL), Amazon (NASDAQ: AMZN) and Facebook (NASDAQ: FB).

Figure 2: Holdings of the QQQ and VGT 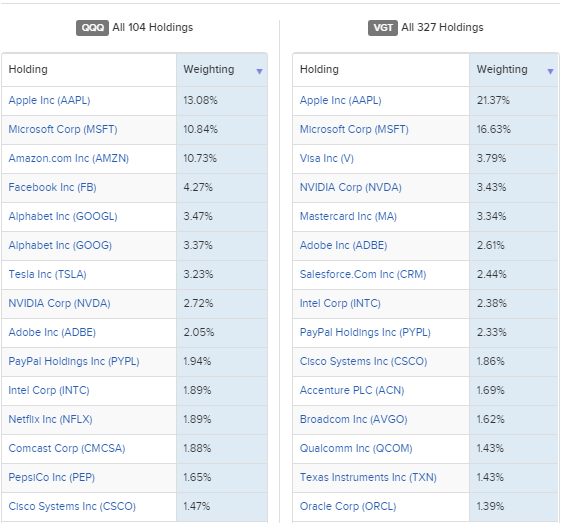 Behind these differences in terms of underlying stocks, VGT has some key strengths when considering risks, profitability and potential growth which means a better score in the Risk-Reward indicator.

First, VGT’s exposure to Microsoft at 17% compared to QQQ’s 11% is a significant differentiator.

One of the reasons is that Microsoft has been making several acquisitions of video game studios since 2018. Hence, seven names have joined Xbox Game Studios, doubling its size. The most recent one, Bethesda marks a major step in terms of quality of productions as well as reputation.

This purchase frenzy is intended to feed the Xbox Game Pass service’s pipeline. For as little as $15 per month, not only the owner of an Xbox console but also of a PC (personal computer) and more recently of an Android smartphone can draw at leisure in a catalog spanning a hundred video games.

Gaming activities are among the most resounding successes for the software giant, with current world events (virtual ones) helping to propel growth up 64% year-over-year to $1.3 billion. Now, with revenues consisting of subscriptions and software products delivered over its own AZURE cloud, there are vertical synergies associated with high margins for Microsoft.

Second, there is Apple as the top holding in VGT’s portfolio.

After upbeat financial results for the second quarter (beating both revenues and expectations), many are excited to buy the stock. However, according to some analysts, there are some risk factors including the trade war which could impact revenues and the possibility for higher production costs for the iPhone 12.

Hence, Apple with both fluctuating revenue and profitability trends but boasting a solid customer base would constitute more of a rearguard action stock for the VGT bastion as it progresses throughout this difficult economic period.

Figure 3: Quarterly revenue and profitability in millions of dollars 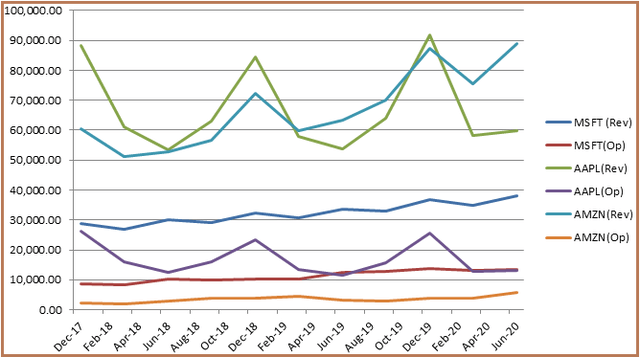 Continuing further, VGT has more exposure to some strong names like Salesforce (CRM), Mastercard (M), Visa (V) and Qualcomm (QCOM) but on the other hand, it also has exposure (albeit to a limited extent) to the likes of Accenture (ACN) and Cisco (NASDAQ: CSCO), both with bleak outlooks according to some analysts.

The IT ETF also has a slight exposure to Oracle (ORCL) in its top ten holdings and by ricochet, to the “TikTok affair.”

Therefore, it is important to check if there are risks of a more challenging nature.

Amid, the current upside, it is easy to forget the September 2nd downside just three weeks back. Prior to this date, some professionals had already showed concern about soaring valuations and the disproportionate influence of a few stocks in the Nasdaq.

Additionally, despite the Fed chairman regularly re-assuring markets that monetary policy would be supportive (interest rate staying low), the most recent fiscal stimulus was already three months away by the beginning of September.

The uncertainty resulted in a downside of 13%.

Amid the downfall, different ETFs were impacted at various degrees. Hence VGT has suffered from higher losses (-0.15%) than its Invesco peer but not by much. However, the Vanguard ETF has suffered from lower volatility by 4%.

Figure 4: Comparison of performance and volatility.

For the sake of fairness, it must be mentioned that QQQ has witnessed better performance over the three-month period by 1.3% but still has been more volatile by nearly 13%.

Also, over a longer period of time of one year, the difference in volatility decreases to 3% but I deliberately took a 3-month time period.

The reason for this is that this time span is more relevant of turbulent times to come as companies start to report third quarter earnings in October and there are debates around the new stimulus package of $2.4 trillion between democrats and republicans in this election year.

This said, the recent rally (September 28) in tech stocks shows that while volatility will be a constant going forward, the risks of having a bubble have been overblown.

Hence, it becomes important for analysts to make use of realism when valuing stocks and ETFs.

Now, a dose of realism does not mean turning into a prophet of doom and spelling out the word “bubble” after every dip. Neither does it mean to be biased as a protagonist of value investing and feeling jealous about the high valuations of tech stocks.

It just means sticking to the fundamentals.

Valuing an ETF by sticking to the fundamentals means firstly, being aware of the risks in this volatile period. Second, there is the importance of considering costs of doing business and versatility. Third, it is crucial to be realistic about growth opportunities.

Hence, after processing these fundamentals into the Risk-Reward indicator, VGT stands out as the better ETF. Also, the indicator allocates a score of 6 to VGT and 5 for QQQ out of a total of 10.

To explain this difference in score is QQQ’s number of holdings of only 104 compared to VGT’s 327 making the former more subject to concentration risks. Additionally, QQQ is likely to be more volatile due to GAFA’s (Google Amazon, Facebook and Apple) scrutiny by congress on abuse of market power and monetizing of consumer’s data.

This is also the case with VGT through its exposure to the Apple’s scrutiny but to a much less extent.

Moreover, for debt-averse investors, except for Oracle with a Debt to Equity level of above 300% but constituting only 1.39% of VGT’s portfolio, most other companies have a debt level of below 100%.

Now moving to the profitability side, VGT with more exposure to software names which are benefiting from higher employee versatility (work-from-home with no need of costly make-up) has seen overall reduced operational cost of doing business leading to higher profitability.

This trend should continue for years with more virtual meetings including video communications.

Also, thanks to COVID-19, software makers are being able to drive SaaS (software as a service) to a degree never seen before. This results in higher profitability as they are able to reduce upfront costs for customers through subscription models.

Operating income of software companies has increased from 5% to 25% on average.

Now, finally coming to growth, with these companies spending a staggering 15-18% on average of their billions of dollars of revenues on R&D, opportunities to either grow organically or through acquisitions are there.

For that matter, I was not able to find at least one of VGT’s holdings which was NOT in the process of acquiring another company with one of the most notable one being Nvidia’s (NASDAQ: NVDA) bid for Arm at $40 billion.

Coming back to the suitability of VGT as an investment, the dividends rate are more attractive with the ETF having consistently made distributions to shareholders since 2004.

It must be highlighted at this point that the dividend rates are peanuts compared to what REIT ETFs currently offer, but again it is better to be realistic about the future by taking a safer approach.

Interestingly, the dividend rate is still higher compared to what investors would have derived by holding QQQ or just Microsoft alone. 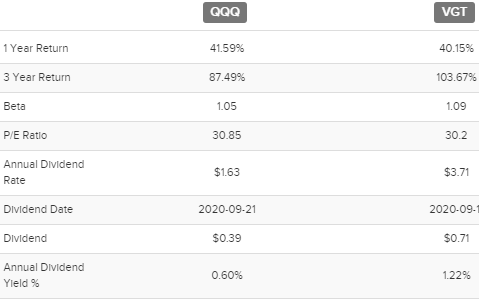 At a P/E of 30, more aligned to the likes of Microsoft, VGT provides diversified exposure to many high-growth stocks with Price to Earnings ratios of well above 50.

This said, there should be some volatility going into the next earnings season starting next month. This should constitute a valuable opportunity to buy into the $290-300 levels for those who missed the rally.

Thinking aloud, a prudent approach calls for viewing VGT more as a 3-year source for stable returns including dividends instead of keeping cash in the bank.

Finally, there have been some talks about a rotation from tech to value stocks posing a risk but as per my coverage of Vanguard Real Estate ETF (VNQ), I could not find sufficient evidence for this to constitute a lasting challenge for the technology sector.

Additional disclosure: I am long CSCO, NTAP.
This is an investment thesis and is intended for informational purposes. Investors are kindly requested to do additional research before investing.