Imagine Baron Munchausen riding a cannonball. Replace the cannonball with something that is longer, like say a rocket. Then scroll further down this page and watch the video you find there. This is exactly how one of the world’s biggest liars would have felt doing that.

SpaceX, Elon Musk’s company in charge with dreaming about humanity’s future away from this planet, has gotten us used to incredible feats. First, there was the reusable rocket booster, which took off and then landed either on pads or on funky named drone ships in the middle of the Ocean.

Then, we had a red car sent to space, for future generations or alien civilizations to find and wonder “what the hell is it?” And, more recently, we started seeing space launches from entirely new angles.

The video below shows the launch of a Falcon 9 rocket during the late August SAOCOM 1B mission. Like many others before it, it went without a hitch, and was captured by a large number of cameras from a variety of angles.

The most interesting angle of all is the one from up high in the boosters tip. Apparently, SpaceX had a camera up there, looking down to the base of the rocket, capturing the entire mission from a new perspective.

We’ve seen something similar to this before (you know, those famous clips showing stage separation in low Earth orbit), but this time we not only get to see the launch of the rocket, but also its landing, and it’s pretty amazing.

The mission was SpaceX’s first launch to a polar orbit from the East Coast, from the Space Launch Complex 40 at Cape Canaveral. It carried to orbit the Satélite Argentino de Observación COn Microondas (SAOCOM), part of an array of satellites used to either predict or monitor natural disasters. 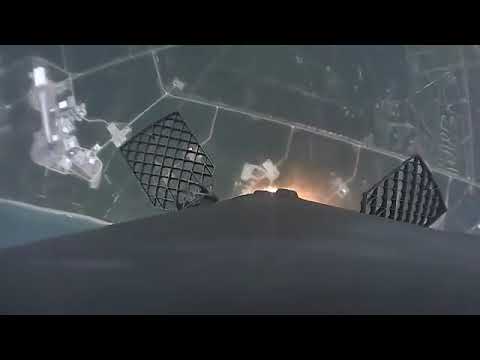