Why Orange Cats are Special, According to Science 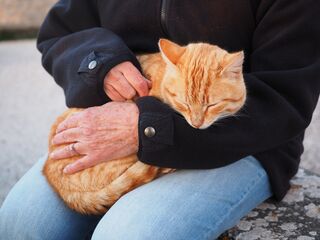 Orange cats are thought to be the friendliest of all cats, but is this just a myth? Self-report surveys indeed suggest that orange cats are more affectionate. This finding, however, could be a result of confirmation bias or the self-fulfilling prophecy, with cat owners looking to support their own stereotypes.

Yet, there are other plausible reasons for why orange cats may be more affectionate. The gene responsible for the orange color is sex-linked, resulting in a much higher likelihood that an orange cat will be male versus female. Although the research is far from definitive, male cats have been said to be slightly friendlier than female cats, which could explain the loving nature of orange cats. Accordingly, “tortitude” may be partially explained by the fact that tortoiseshell cats are almost always female.

But might there be another reason, besides gender, that explains the unique behavior of orange cats? Pontier et al. (1995) conducted a study examining the frequency of the orange gene variant among cat populations, finding that orange cats may differ from other cats in a number of ways.

To conduct their study, the researchers sampled from 30 cat populations in France from 1982-1992, collecting data on 56-491 cats from each population. They found 3 interesting trends with regard to orange cats.

1. Orange cats are more common in rural (less dense) as opposed to urban environments. This finding suggests that orange cats may enjoy greater reproductive success in particular social conditions. In rural environments, the mating system of cats is more polygynous, meaning that while male cats tend to mate with multiple female cats, females tend to mate with only one male. Meanwhile, in urban environments, both female and male cats have multiple mates. 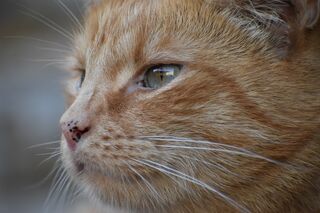 2. Orange cats are less common in areas with greater mortality risk. This finding indicates that orange cats may be more likely to engage in risky behaviors that result in death. 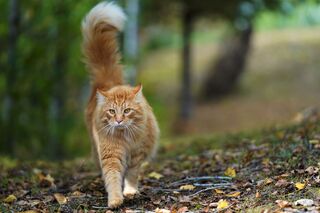 These intriguing patterns led the researchers to come up with a theory – that due to physical and behavioral differences, orange cats (the male cats in particular) may rely on a different reproductive strategy. Specifically, since they are larger in size (and likely more aggressive given previously documented links between a male cat’s body size and aggression towards other cats), orange male cats may enjoy greater social status and thus reproductive success in rural locations where females typically only mate with one male. However, in urban environments, their social status may not get them as far. In these dense environments, female cats tend to mate with many male cats. As a result, reproductive success is dependent on sperm competition rather than physical competition between male cats. Therefore, in an urban environment, the competitive nature of orange male cats may heighten their risk of death (e.g., through fights with cats or other animals), thus driving down the proportions of orange cats. This idea is supported by past findings that larger male cats are more dominant and aggressive, resulting in both greater reproductive success and greater mortality risk.

Although these color-based behavioral associations may seem odd, they are found among other animals including rodents and birds (as reviewed in Pontier et al., 1995). Certain genes responsible for behavior or other physical attributes (e.g., body size) may be inherited alongside those responsible for fur color.

This study identifies several unique characteristics of orange cats, however, it does not explain why orange cats are friendlier to humans. If this stereotype is true, might it be attributed to the risk-taking behaviors of these special cats? Perhaps orange male cats, due to their dominant status and bold personalities, feel more comfortable with approaching humans, who often frighten timid cats. Future studies can investigate whether this might be the case.