HP Inc. (HPQ) has long been a questionable stock that investors purchased on account of its yield. With a low valuation and generous shareholder returns, a leadership position in its largest-revenue segment (personal computers), and a storied brand that has survived several decades in an ever-changing technology landscape, HP Inc. has still managed to retain some appeal in its share price.

Yet this year, the coronavirus has dramatically impacted HP’s business for better as well as for worse. Its two main businesses have seen a very divergent response to the pandemic:

Investors have interpreted the pandemic, and HP’s most recent results, as a net-negative. Though the stock is well off its lows in the mid-teens notched in March, shares of HP are down ~7% for the year, underperforming the S&P 500 by more than ten points.

The question that investors are grappling with now: is HP Inc. positioned for a rebound (the stock’s consistent upward trend since March suggests sentiment is improving) and is the dividend (just shy of 4% based on current share prices near $19) sufficient enough reward for patience, or is this a dog that is on the way to becoming as irrelevant as IBM (IBM) in the tech space?

I moved to a neutral stance on HP Inc. last quarter, and after reviewing the company’s latest results (and in spite of strong recent shipment estimates for Q3), I remain uninspired on HP’s prospects.

The main reason here: printing is HP’s lifeblood. Though most consumers know of HP through its PC lineup. HP has grown dependent on this high-margin, recurring revenue stream from enterprise clients to sustain its profitability, its cash flow, and its dividend. The future of printing has shifted: the more that we work from home, the less we use printers. Looking even further ahead from the present moment, work trends are changing. Offices and employees have become more sensitive about paper usage, and with the growing proliferation of devices like tablets, printing will become less of a necessity.

The bottom line here: without a future in printing, there is not much of a future for HP. We’d have liked to see HP start to pivot its business in order to replace some of the (potentially permanent) loss of profits from the printing division, but HP has nothing outside of its lower-margin PC segment, having spun off the software division as HP Enterprise (HPE) years ago. Steer clear here. 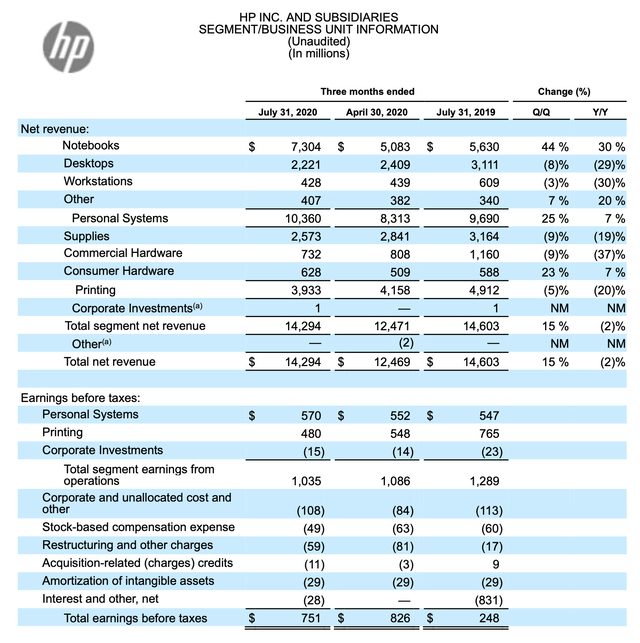 As previously mentioned, HP’s two main businesses is a complete tale of two cities. Let’s start with the good news first: HP’s personal systems segment saw 7% y/y growth to $10.36 billion in revenue. This was a superb acceleration from -5% y/y decline in Q2: though units had grown at a 5% y/y pace in the prior quarter, a downward shift in ASPs to cheaper-priced notebooks brought revenue down.

This quarter, on the other hand, HP’s 11% y/y increase in units sold helped push PC revenue into positive territory. Notebooks (mobile computers) were the highlight in the quarter, up 30% y/y and more than enough to offset declines in desktops and workstations. Note as well that most of this revenue growth came from the consumer side: consumer PC revenues were up 42% y/y in the quarter, partially offset by a -6% y/y decline in enterprise revenue.

Unfortunately, however, though the personal systems business ~70% of HP’s revenue, it’s a much smaller slice of HP’s profits. As a result of this, the declines in the printing business have much more of an impact on the business than the slight growth in PCs.

HP’s printing revenue fell -20% y/y, a nearly $1 billion shortfall in revenue versus the prior year. HP’s printing division has historically generated mid-teens operating profit margins versus only mid-single digits for the PC business, so this revenue shortfall really hurts from a profitability perspective. 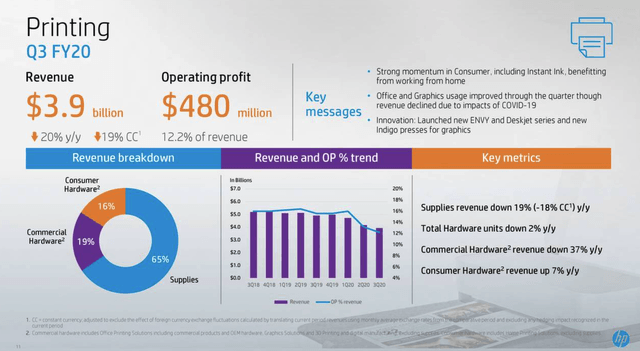 The only bright spot in the printing division was consumer hardware, as people stocked up on printers to accommodate work-from-home. Commercial hardware revenues, however, sank -37% y/y, and the richest-margin business of all of HP’s units, supplies, saw -19% y/y declines.

There is a bright spot, however – HP noted that as the pandemic progressed, the company saw signs of recovery. Per CEO Enrique Lores’ prepared remarks on the Q3 earnings call:

Importantly, in commercial printing, we did see some improvement as the quarter progressed. In Managed Print Services, July page volume was down roughly 25%, an improvement from April, where do we saw a decline of roughly 40%.

While there remains much uncertainty about the phasing and pace of recovery, this is an early indication of office usage heading in the right direction. At the same time, we are making progress against our plans, plans to disrupt industry with our technology solutions and IP.”

Still, however, HP is expecting the downturn in printing to weigh on its overall results for quite some time. On a consolidated basis in Q3, HP saw operating profits decline -28% y/y to $779 million, representing a 6.1% operating margin – down 150bps from the prior-year Q3.

Importantly – these headwinds are expected to largely persist going forward. Management noted that operating margins in personal systems will decay in Q4. From HP’s CFO’s earnings call commentary: “we would expect Q4 operating margins to be lower compared to Q3, driven by mix changes, but still be in the upper half of our 3.5% to 5.5% long-term operating margin target range,” while commercial print would remain “depressed” but see improvement relative to Q3.

The big question hanging on investors’ minds is: right now, the stock is being propped up by a generous capital returns program, but its current pace is looking more and more difficult to sustain. Year to date, HP has returned $2.5 billion in cash to shareholders (one third in the form of dividends, and two-thirds in the form of buybacks), but that’s 121% of the $2.1 billion in free cash flow that it generated this year. 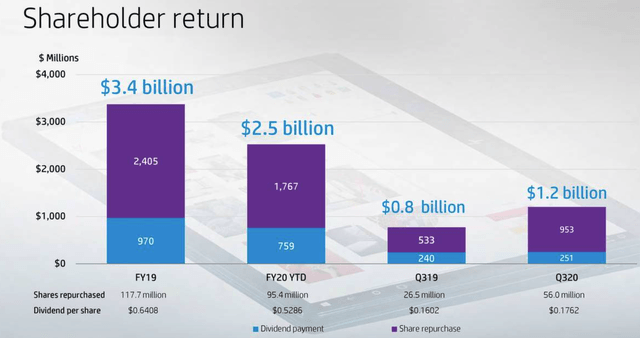 If HP makes a move to slice its dividend or decelerate its share repurchase program, it may remove a key support for the stock.

Given the massive declines in HP’s printing business – which, in the past, generated approximately two-thirds of the company’s operating profits – I’m cautious of relying too heavily on HP’s dividends/share buybacks to prop up its share price and spur a rebound. Despite being a value stock, I’m content to watch this stock from the sidelines.

For a live pulse of how tech stock valuations are moving, as well as exclusive in-depth ideas and direct access to Gary Alexander, consider subscribing to the Daily Tech Download. For as low as $17/month, you’ll get valuation comps updated daily and access to top focus list calls. This newly launched service is offering 30% off for the first 100 subscribers.